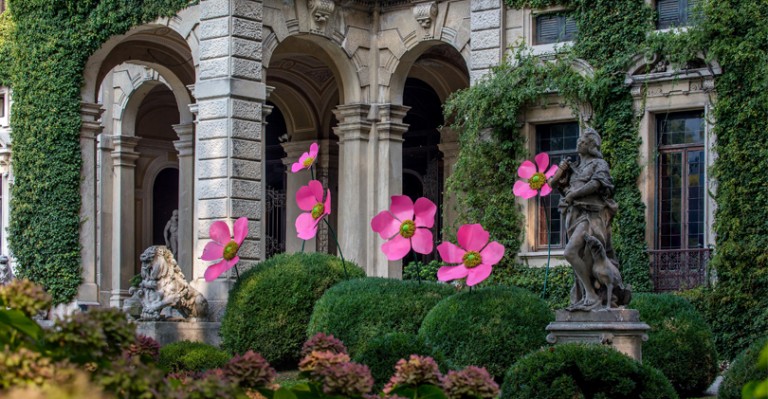 Villa Erba is one of the most renowned villas in Italy.
The main building overlooks the Lake and has an imposing presence and exhibits monumental architectural style and decorative lines. In 1972, it was chosen as the setting for the movie “Ludwig”, last of a celebrated series known as the “German trilogy” directed by Luchino Visconti. The great Milanese director (1906-1976) found himself at ease working in such a familiar place, since the building had always been in his family’s ownership.

In 1986, Visconti’s heirs sold the Villa along with its garden to a consortium of public authorities. The consortium converted the Villa into an important centre for exhibitions and conferences, thanks to the new pavilion designed by the architect Mario Bellini, resembling nineteenth-century “winter gardens” with its transparent structure.
Villa Erba Garden is unique among all those scattered along the shores of Lake Como, because it is the only one to be mostly flat. It has quite an English “taste”, created by the masses, volumes and colours of different types of trees to powerful effect.

It is likely the current design has characterised the place since its origins and has been maintained by the subsequent owners, surely because of the charm created by the canopy of linden trees and plane trees which waver in the breeze.
The course of the seasons makes this botanical composition even better, so that the visitor may witness it’s bare trees in the winter, it’s spring green canopy becoming summer resting shadows, and the transformation of it’s red and orange foliage in the autumn.

Among trees there are statues of mythological subject, sculpted by Mazzuchelli. The area is divided into some wide green spaces, connected together with paths of eighteenth-century design. Green tones are the dominant colours, however gardeners usually arrange colourful compositions made of different yearly plants and flowers during the warmer months.

The top three botanical specimens are:
First Taxodium distichum samples can be observed in the garden all along path side, running along Via Regina.

A second marvelous section, located between the main building of Villa Erba and the Lake, is a series of common Box spherical-shaped bushes (Buxus Sempervirens), which acts as a intermediary between the darsena and the lake.

The Plane-tree towering over the dock is a majestic botanical specimen, a must-to-see pride of the Villa.