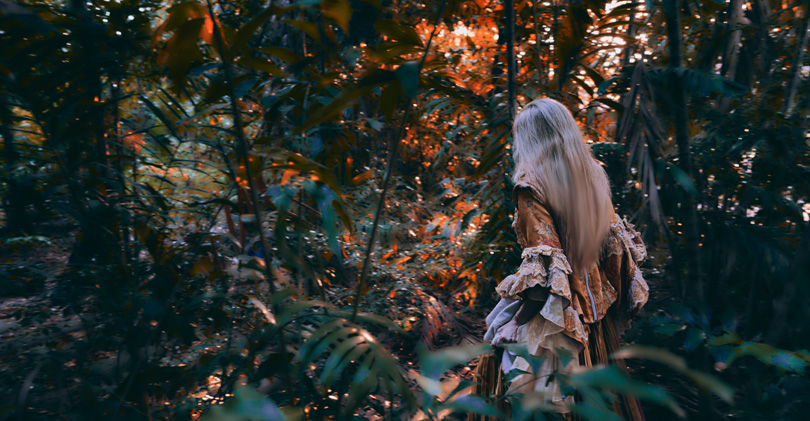 “One day Alice came to a fork in the road and saw a Cheshire cat in a tree.
“Which road do I take?” she asked.
“Where do you want to go?” was his response.
“I don’t know” Alice answered.
“Then,’ said the cat, “it doesn’t matter.”
(from “Alice in Wonderland” by Lewis Carroll)

… the fairy tale, with its very long legs, travels through the centuries until one day, intertwining with other genres, it becomes an author’s fairy tale, in which, between expanded boundaries, exasperated marvel and muted realism, even the landscape is renewed.
A metamorphosis that takes place among the fairy tales of the great nineteenth-century authors such as Andersen, transporting alongside the classic places of the fairy tale in the Nordic space, among rivers, forests, sea and urban space. The landscape intertwines fairytale sensitivity with a realistic conscience: the park, the lake, the ship, the city of winter and parties. In a fairy tale, the urban and rural world intersect, in the slow passing of the seasons.
It happens together with Collodi, with whom the Tuscan village and countryside, the island, the shark’s belly… appear. A blurred landscape, between real, surreal and symbolic places, whose succession is a metaphor for the spaces of the world and for growth. We are at the crossroads between folk tale and cultured fairy tale, and in the intertwining of myth, fairy tale and novel.
Change also makes its way with Carroll, in a surreal and virtual dimension of space: another world with shapes, rules, alternative rhythms to the real and fantastic-fairytale one. The whole landscape, even if with its real features, frees itself from the laws of the real landscape.

In the author’s fairy tale, the landscape descriptions breathe deeply, while the spirit of the characters is discovered in depth, almost like in a novel. It was born among the pages of books to entertain those who can read, open to the author’s imaginative and sophisticated flights.
The tale of the oral tradition originates in a completely different social and economic context and is handed down among the people along the threads of memory, from mouth to mouth, often during work, between fears, hopes and fatigue of living. The rhythm presses, the story goes by fast, it does not go into the descriptive detail of the landscape, instead painted in large brush strokes because it wants to take shape only in the listener’s imagination.4