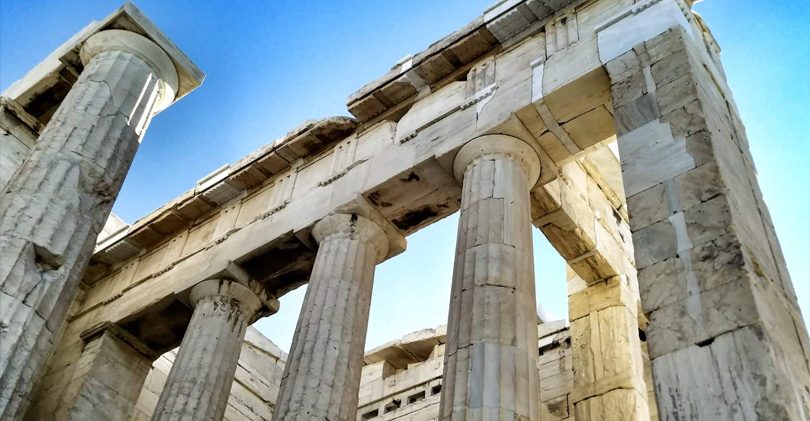 On the Acropolis of Athens

“To meet Dionysus, just go to a vineyard in Southern Italy, in late summer, under the midday heat; lie on your back on the warm earth beneath the entwined fronds and look up at the swollen berries of hanging clusters, your face immersed in the light that plays with the vine leaves, and surrender to the god of intoxication and to the zoé of his life force”.
(Karl Kerényi and the Dionysian moment)

The landscape. What power does it have over us?

Just let ourselves go between the references, the emotions, the hints of the places.

We are in a world populated by lights and anthropomorphic forms, among the words of Cesare Pavese, where the landscape is a sensual female and the hills are her breasts. And in the aromas, in the radiance of leaves and fruits ripening in the heat, the summer vineyard recalls the mysterious intimacy of the woman.

The woman is the personification of the earth from where she seems to be born: her physical characteristics are the same as the landscape, her voice seems to come from the hills and on them the light of dawn is her gaze.

From the words of a poet to the vision of a landscape architect, Emilio Trabella, who captures and tells the very brief moment of a place and its suggestions: “On Lake Monate, when the sun sets, the shadow of the hills on the lawns creates the silhouettes of two kissing figures”.

It is our experiences, our desires and our sensitivity interpreting places. But what if the emotions we feel in the presence of the landscape were not only in our mind and our senses, but also inherent in the landscape itself?

Let us go back to the ancient Greeks and discover a sensitivity towards the emotional tone and the intrinsic forces of the places.
The choice of building temples on promontories over the sea, on slopes in fertile plains, isolated heights or on the edge of deep cliffs is dictated by the place itself, which evokes particular divinities, speaks of them and bears witness to their favours.

Vincent Scully, an American art historian, to whom we owe the unveiling of the sacred nature in the landscapes of the Greek world, in his “The Earth, the Temple and the Gods: Greek Sacred Architecture” describes the places where the temples dedicated to Poseidon stand as “Places pervaded by the rhythm of the rotary movement of the earth, of the swelling of the sea. […] They were actions therefore that demanded the consent of those nonhuman forces, the horse and the sea, from which their splendid sense of power derived”.
Scully’s analysis then continues towards Aphrodite’s shrines and indicates “the appearance of unexpected and irresistible forces, expressing a nature at once aggressive and triumphant”.

Here is the manifestation of the genius loci, “the spirit, the tutelary deity” of the place. It has its roots in the classic idea of the sacredness of the landscape which is found in both Latin and Greek cultures.
In ancient Greece it is the “Daimon”, for the Latins is the “genius” existing in the soul of men and places, which therefore must be respected, loved and valued as a true divinity becoming personifications of natural elements.
The spirit has a particular “strength” and the ability to influence the people who live there.
Over the centuries the genius loci takes on different appearances, very distant from the ancient vision: now it is “the essence of a place”, the environmental character to be known and respected, in order to be able to design and build it without distorting its peculiarities.

From poets to landscapers, to architects, now we are among the brushstrokes of painters, in search of what transports us so emotionally into a Corot tree, what enthrals in a garden by Bonnard or a horror by Turner. Or in the landscape revealing itself before us, when at the dawn of a winter day, while travelling in our car, the “blue hour” envelops everything, paints the mountains and the frozen fields around us, immersing us in an unreal dimension, which we like and which touches “our most sensitive and deepest feelings”. What is that “strength” transmitting emotions to us?

Whether in paintings, words or thoughts, landscapes “take us elsewhere”, as the etymology of the word seduction suggests, far from our usual experiential space.
“They move us and turn us away from submissiveness to habit”. Places seduce us and give us aesthetic pleasure: an experience in which we perceive and breathe them, inhale them and … get to know them.

Tommaso d’Aquino wrote “Knowledge is realized when the known object is inside the one who knows”.