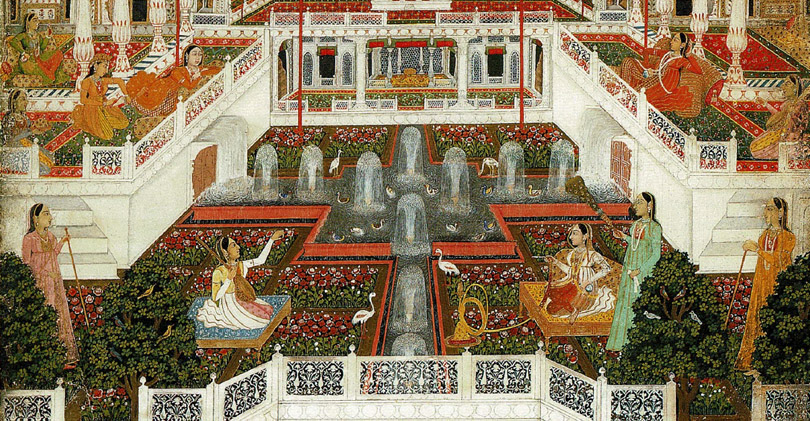 “Those gleaming, dazzling parties of his were with me so vividly that I could still hear the music and the laughter faint and incessant from his garden”
(“The Great Gatsby” by Francis Scott Fitzgerald)

A garden and the sparkling lights of the party. Carpets, silk and dancers. Enjoyment of silence, nomadic tents, abounding wine.
Please welcome the seductive parties in Islamic gardens!

There is actually no Islamic garden, but there are the gardens of the Islamic world, born from influences and legacies of three pre-Islamic ethnic groups, that is the Arab, Persian and Turkish one, together with their respective visions of nature and landscapes. Until 1256 the gardens showed similar aesthetic trends, then they took their own ways.
In the Arab world they are places of free beauty and pleasures on earth, where parties are always welcome. In the Turkish culture of Tamerlane meadows are dotted with silk tent pavilions.
Let’s get this party started!

The garden of pleasures

Seductive, sensual and carnal.
The garden of the Arab world is a place for the enjoyment of the five senses and was born with this aesthetic and seductive purpose. “Only in the hortus conclusus, protected by high walls from dust and noise, the Arab rejoices in solitude of the perfumes and colours with a sensual pleasure, because the Arab garden is essentially a secular place: paradisus voluptatis”.1

Some ingredients are essential for magic to happen.
Water, a very important aesthetic-seductive component, is the signature of a common idea of beauty. It is a sensual pleasure both for its warbling and its sparkling light. It is enjoyment with its refreshing and tasty flavour: “and they will be honoured in Gardens of delights on side by side beds and a glass of crystal clear liqueur will circulate among them, delicious for drinkers, who will not suffer from headaches and will not be intoxicated.”2
And so vegetation. It is beautiful with its leafy green; tasty and sweet are its fruits. It is a bearer of shadow and peace for the body: “And it rewarded them for their patience; garden and silk premium, where they will lie on high beds, and they will not see the sun, and they will not see the frost and the shadows will be close as well as their fruits, gently humiliated”.3

The garden is the space par excellence of initiation to the pleasures of the senses: maidens with big and black eyes on green cushions and gorgeous rugs, among palms and pomegranates, jasmine, privet flower, pepper, lavender, roses of all kinds, plantain, myrtle.
It is a reward for the righteous and the patients, but let no one challenge the beauty of the otherworldly one, promised in the Koran. Under pain of a sure punishment.

Ma’mūn, laqab of the Abbasid dynasty in the 11th century, had a beautiful garden lounge built in Toledo, which was called Al-Mukkaram and inside which there were two huge silver trees: through these trees the water was made to rise and then collected in two basins at the base, from which it then fell in the form of drizzle or dew.
He then had a crystal pavilion built in the middle of a pond: in the centre the king sat without getting wet, while on the walls a veil of water continuously ran through an extremely complex mechanism. If then small lights were turned on, the pavilion sparkled from the inside. Pure beauty, pure magic.

Such a voluptuous and seductive garden is a preferential place for carnal enjoyments. Sexuality, feast and garden thus establish a double bond, expressed above all in the world of the harem. The idea of the harem comes from an obsession of Near Eastern rulers, a way of showing wealth and well-being. This word, as well as harlot and houri, comes from the same Babylonian root Har, the name of a part of the temple of Ishtar, a famous all-female sanctuary.
In Achaemenid Persia the kings were famous for the stunning number of women sent to them from more than 20 nations: King Artaxerxes II had up to 300 women and 118 children. A Sassanid king (second Persian dynasty) is said to have had 3,000 wives and 12,000 women in his harem.
On this Persian tradition, considering all the complexity of the relationship with sex in the Islamic world, the traditional vision of the Arab world and its harem develops, among belly dance, silk, cushions, rugs and plots of power.
It is in voluptuous India, and in its Mughal gardens, that a mixture between tantric sexuality and Islamic sexuality is born.
“In the 11th century, the Indian king Shrenika threw vegetarian orgies whose courses were defined not by the dish served, but how it was consumed;  the first course consisted of fruits that were chewed, then a course of the sucked, then the licked and so forth” so wrote Lee Allen, writer, journalist and reporter.

The garden city, the tent pavilions and the mesires

In the Ottoman garden, parties, enjoyment and hedonism seduced through another form, much less carnal.
First of all, when creating a garden there was no intention of artificially recreating a dream space, there was no Oasian tradition behind it (> Travelling into a landscape in the seductive dream of the Persian garden).
The enjoyment of nature occurred in nature. It was the “views, plants and spaces”4 that turned into points in the landscape to contemplate the landscape itself, without architectural structures that modified or dominated it.
Any place could become a garden, at any time, and be enjoyed through outings  – camps – the  mesires. It is said that “entire families and groups of friends occupy a certain space for hours, sometimes for days, and set up tents”.5
The love for mobile pavilions was a habit dear especially to Tamerlane and his Samarkand, in whose gardens the Leader had them set up with silk covers, having a strong nomadic connotation, for parties.
“one of the pavilions of Tamerlane was instead a real mobile building. It was square in shape and dominated by a domed structure more than ten metres high. This was supported “by twelve poles, the size of a man’s chest, painted in blue, gold and other colours”. Outside it had a sort of portico made up of 24 smaller poles and 40 gold cords which held the structure taut. The inside and the outside parts were completely covered with “beautiful silk fabrics worked in different ways and in various colours, hemmed with gold thread. The richest part was the decoration of the vault, which represented, at the four corners, figures of eagles with spread wings”.6
The wine flowed before eating, with the obvious consequence of everyone being drunk.
Giulia Cazzola tells us that “the effect (was) of real fictitious cities, creations of ropes and fabric” and the large tent in the centre of the camp was “a structure that looked like normal architecture, but which, in reality, consisted of only fabrics on scaffolding of wood and stretched ropes.”.

The tent-pavilion, often a canopy with a silk cover, was one of the distinctive customs of Safawian Persia, from 1501 to 1736, for the hunting trips of the shah. It was equipped with fountains and around it, to evoke the presence of a garden, flowers were planted and chic picnics and dinners were organized, with everybody sitting on the ground.
In Isfahān, in 1619, Pietro della Valle for example, recalls the arrival of the Spanish ambassador and the beautiful outdoor party organized for the occasion. All around thick huge trees and plane trees casting their shadows. And then a fishpond which, like a peninsula, overlooked a small loggia, covered only by a light roof and open on all sides.
Evening came and the guests sat down around the fishpond while “dinner was prepared on the carpets on the ground”7, the party was laid with “quantities of large plates of gold and silver, covered with a dome”8. The night banquet was lit by large candles above the drapes on the ground that served as tablecloths, and by lamps of fat above the basins. All was mirrored in the water, while instruments and voices accompanied the conversation.

The liveability of the external environment and the natural passion apply to all Islamic gardens, but in the Ottoman world they developed with their own uniqueness.
The Ottoman “environmental hedonism” is based on a peaceful contemplation: just find a seat, a corner of a lawn  where you can sit, rest, sing and eat, but with a precise attitude to enjoy the context: “the slowness of movements and the sedentary lifestyle, the composure, the sense of quiet and the love of silence are behavioural factors that have a significant impact on the sense of space and on the choice of places and forms in the environmental civilization of the Ottomans”.9

It also impregnated the very idea of the gardens in the city and their relationship with the structures.
A tree, a corner of the lawn, everything could become a garden: “A paved courtyard can express the same feeling for the natural space of a garden of roses and cypresses, because in both the opening towards the landscape and the links with seats and kiosks are the same”.10
The city in fact relates and dialogues continuously with the context, determining an open urban form: there are no precise boundaries that divide it from the countryside, it is not a walled city, it tends to sprawl and becomes irregular and functional for a life of relationship with nature. It seems to have a lack of structure, as we look at it with a rationalizing and wrong logic: “In this sense, the Ottoman culture contains Asian rather than Middle Eastern elements, it remains more distant from the spatial conception of Mediterranean Europe than the Arab and Persian architecture”.11
It is the green mass, the garden city of Samarkand wanted by Tamerlane: poplars and trees planted according to the colour of their leaves and their scent, so much so that, it is said, one seems to be walking in a forest with a city placed in the middle. The Turkish love for flowers, but above all for trees, gives it a dress not necessarily exuberant and colourful, but green, with an omnipresent nature. Each courtyard has a pavement that leaves room for a tree.
The inside and the outside merge. It is the legacy of the nomadism of the prairies, with open, ephemeral and removable pavilions, houses with views without fences and limits, where the garden is born from an internal epiphany, in every corner.

“For the inhabitant of the Ottoman city there seems to be no happiness without the contemplation of a piece of nature that no artificial garden can replace”.12