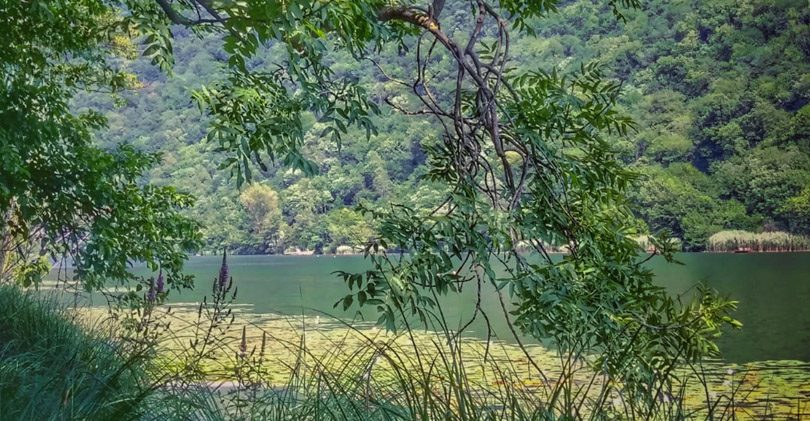 “(…) I saw this pleasant territory in one glance, from the heights of Castelmarte to Inarca, wonderful situations that make you cry out to the miracle of nature, and all innovate your soul with fresh and virgin poetry. From Inarca, primarily, when the day is on vespers, you would truly enjoy the fairest scene. Under the green little mountain rising on the left side, called Carella, you see the brown waves of the Lake Segrino flowing, a melancholy lake that follows the foot of that mountain (…).
(Giuseppe Parini)

Lake Segrino, a body of water embedded in the woods, a source of inspiration for poets, artists and legends, with a dark melancholy mysterious charm.
It is located in the province of Como, within the park having the same name.

In front of its waters, the feeling felt and described by Stendhal in his “Journal du voyage dans la Brianza” is an emerald melancholy.
Ippolito Nievo in “La pazza del Segrino” tells “(…) surrounded by dwarfs and dusty reed beds, it seems willing to gather there not the fertilizing rains, but the eternal tears of nature”.
For Antonio Fogazzaro its dark atmospheres are the ideal setting for “Malombra”; the landscapes surrounding it are portrayed by Giovanni Segantini and the surroundings of its eastern shore are the scene of the events in the unfinished novel “La cognizione del dolore” by Carlo Emilio Gadda, who renames it See-Grün, the green lake.
We find the Lake Segrino in the sketches of the Brianza lakes in Leonardo da Vinci’s Codex Atlanticus;  he stayed there and found an unusual optical phenomenon of light refraction called Fata Morgana (mirage).
It is the winter of 1942, when the frozen lake becomes the natural setting of some shots of the film “Un colpo di pistola” (A gunshot) by Renato Castellani, set in Russia and inspired by the story of the tale by Aleksandr Sergeevič Puškin.

The sacredness of the place

The most probable etymological hypothesis is the Latin Fons sacer, Sacred spring, which over time turned into Sacrinum and subsequently into Segrìn in the local dialect.

This sacredness of the place can be perceived – here emotions are intense and in the ancient history of the lake lie the origins of its powerful charm. It is assumed that its banks were a necropolis following the discovery of ancient tombs from the Bronze Age, which add to others found in the surrounding area and dating back to the Iron age.

An ancient legend tells of Lake Segrino as a refuge for a terrible dragon, whose insatiable appetite forced the king to offer human lives in sacrifice, after all the livestock of the kingdom had ended up in the jaws of the monster. A terrible fate for all subjects, even for the sweet princess  Cleodolinda. Accompanied on the shores of the lake, she was abandoned to her fate under a flowering elderberry plant. However, a knight, St. George, came to her rescue, and, moved by the girl’s tears, after giving her a flowering elderberry branch, he faced the monster and hit it with his spear. The Saint tied the wounded dragon and led it to the king, where he killed him before the whole court. From the twig that the princess was still holding in her hands, the white corollas came off and fell into the dough of the pan de mej (bread made of millet) that the castle cook was preparing. That happens to be the origin of the pan meitt, typical elderflower sweets, offered on St. George’s day.

A story instead tells of an event that happened during one of last war’s winters: a carter, who had fallen asleep on his cart, involuntarily crossed the frozen lake. Upon his awakening, seeing the footprints of the oxen and the marks of the wheels left on the ice, he realized that he had abandoned the road he always travelled and became aware of the danger averted. As a thank, he built a chapel dedicated to the Virgin Mary, which still exists today and houses a painting depicting the scene of the sleeping carter during the unconscious crossing.

The waters of Lake Segrino are dotted with water yarrows, white water lilies and yellow water lilies. They are inhabited by many species of fish, while its banks are populated by black alders, willows and poplars. Approaching the shore, the “dusty reed beds” are a refuge for hundreds of species of birds and in the mountains surrounding it there are chestnut, hornbeam and ash woods. In its marshy areas there are amphibians, such as the Common toad and the Lataste frog.

Also the presence of some endangered animal species defines the park’s important naturalistic interest. The cycle-pedestrian path, winding along the entire perimeter of the lake, allows you to enjoy a landscape full of suggestions, to immerse yourself in those atmospheres that relive from the past and intertwine with our perceptions.
Listening to the spirit of the place and imagining that small island appearing close to its eastern shore, drawn in a map of the early 1800s, but of which there is no trace, is the ideal opportunity to devote time to yourselves and synchronize it with the long rhythms of nature.