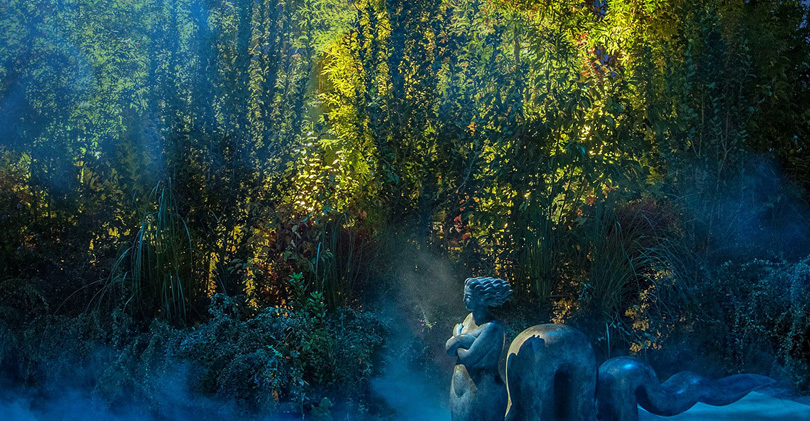 Ph. by Luciano Movio. The “Sirena” – Siren – by Luigi Galligani in the installation “L’Isola del tesoro” – Treasure Island – by Vittorio Peretto at Orticolario 2019
(homage to the siren of the fairy tale “Fortunio” in “Le piacevoli notti” by Straparola)

Once upon a time…

… indeed, there is always a first time, like the one in which the “fairy tale spark” was lit in man.

A long long time ago, for the first time in the world and perhaps in front of a fire, someone began to tell a story.
He did not know that that story would travel through the millennia and that with him the posterity would dig in the origins of the oral traditions and their dense web.

Thanks to an academic research from the University of Durham (UK) and Lisbon, published in the Royal Society Open Science magazine,, it was possible to trace the folk tale “The blacksmith and the devil” up to the Bronze Age, thus opening a new portal on the cultural exploration of the ancestral society in which it was born.
The story tells of a blacksmith who first sells his soul to the devil in exchange for supernatural powers, and then manages to deceive him. A story not well known today, but in which we find the famous theme of the Faustian pact.

The search for the roots of peoples through fairy tales, travelling among myths, languages and traditions, carries an important message: the fundamental and universal value of narration for the evolution of humanity is revealed in its persistence over time and in its expansion into every place in the world. It “probably is the most adequate metaphor of civilization, the place of traditions, archetypes and the symbolic unconscious”.

Born and handed down long before any literary document emerged, in a moment of their very long journey, fairy tales began to be transcribed.
The first collections discovered so far come from India in the second century A.D., while the first time in Europe dates back to 1550 among the pages of “Le Piacevoli notti” by the Italian writer Giovanni Francesco Straparola, in which fairy tales and short stories alternate, sometimes exchanging traits. The journey, the engine of the adventure, starts from the flower garden of a villa and continues in the landscapes of an eccentric geography, between unusual, sometimes uninhabitable, remote and sylvan spaces.

Fairytale spark in the cinema

The first encounter between fairy tale and cinema takes place in 1899 in “Cendrillon” by the French master Georges Méliès: a six-minute short film based on the fairy tale of Cinderella, in which the scenes are pictures in motion, where you can see and breathe art.
Here it is and Enjoy it

Fairy tales are the guardians of the flow of existence, witnesses of a world not to be forgotten. With them we learn and teach, we keep the past alive, while leaving a trace of the present in the future.
Let’s look for them and invent them, let’s tell them and listen to them.