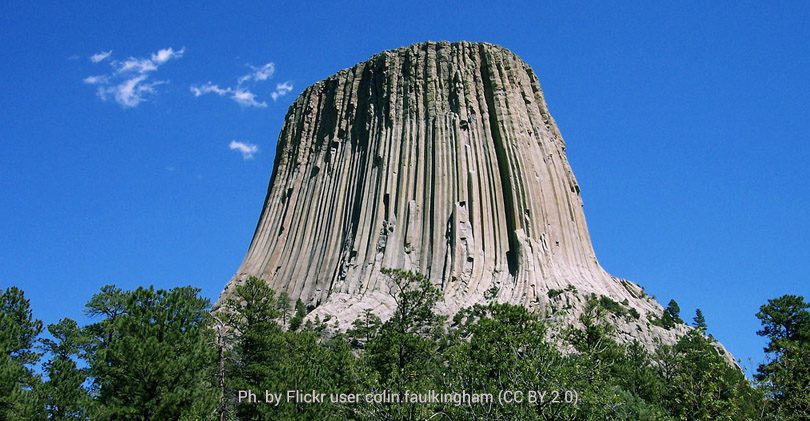 Film and landscape lovers, here is a film scene.
So particular as to be chosen by Steven Spielberg as leading landscape in his film “Close Encounters of the Third Kind”.
It is located in the USA, in the State of Wyoming, and its name is Devils Tower. It is a 800 feet high rock tower surrounded by the homonymous national park.

The origin, the history, the shape

The peculiarity of its shape is legendary and its origins are mysterious.
The current name was given during a scientific expedition in 1875, and has probably been transformed over time, with the succession of different transcriptions and interpretations of the original name. The truth is lost in history, but in 1906 it was officially recognized by President Theodore Roosevelt, who contextually declared it as first national monument.

It is made of phonolite porphyry and presumably formed underground from molten rock about 50 million years ago: the magma, pushed upwards, cooled and hardened in the surrounding sedimentary rock which, due to the erosion, showed the Tower between 5 and 10 million years ago. Some theories suggest that it was originally part of a volcanic system, others an underground intrusion. A phenomenon resulting in the incredible shape of the mountain and the unusual pillars on its walls, the largest example of columnar junction in the world.

The summit is as large as a football field with a light dome shape and is populated by at least 28 botanical species including wild flowers, cacti and, surprisingly sagebrush, Artemisia tridentata, which usually loves drier habitats.
The distinctive features are not limited to the Tower, but include the whole park, where biodiversity reigns supreme. Its 1,347 acres form an ecotone, a place where different habitats meet: the forests of the Black Hills, the prairies of the Great Plains and the riparian areas of the Belle Fourche river create an infinity of ecosystems, where more than 500 species of native and non-native plants live.

The Tower is considered sacred by many Native American tribes such as Arapaho, Crows, Cheyenne, Kiowa, Lakota Sioux, Shoshone, …. Here, even today, rituals considered sacred are held, especially in June, when climbing is forbidden to the public.

There are two legends on the rock and the columns resembling claw marks.
The history of the Lakota Sioux tells of the attack of gigantic bears on a group of six little girls playing and picking flowers on a rock. After crying for the help of the Great Spirit, the girls were saved: in order to ensure that the bears could not reach them, the divinity lifted the rock up to the sky. In a vain attempt to climb it, the animals fell, leaving the deep marks of their claws on the walls.

In the Kiowa legend the story is the same, but with an addition … The protagonists are seven and, after reaching the sky, they are transformed into the constellation of the Pleiades.