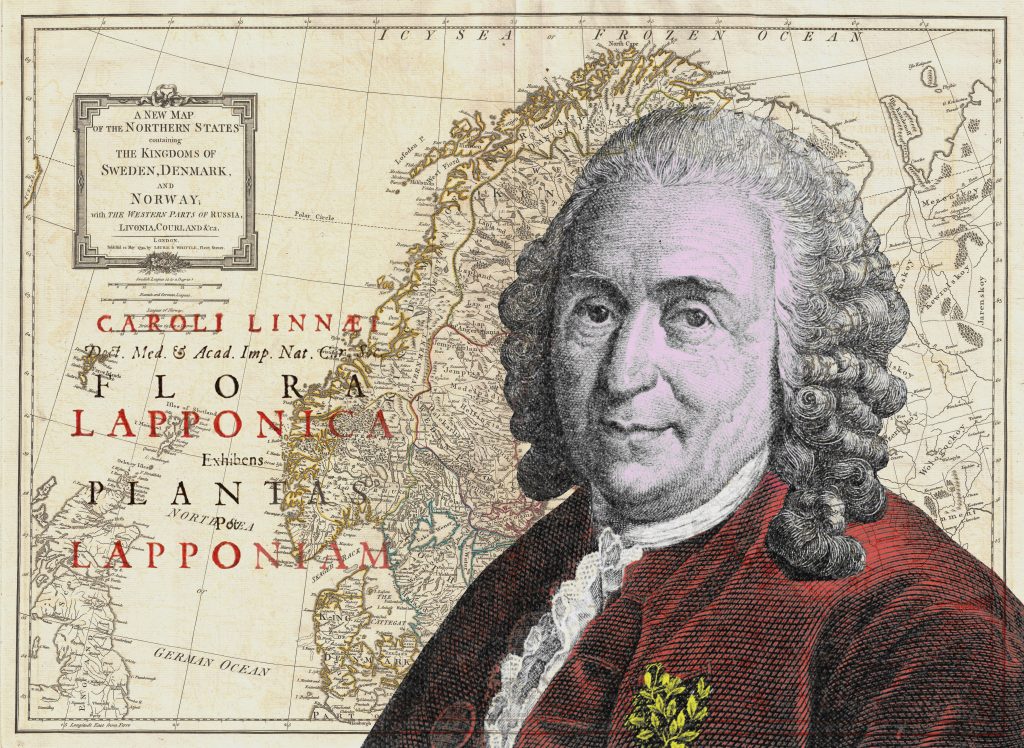 Among botanists, naturalists and plant hunters, how can we not tell the adventures of Carl Linnaeus.
He classified everything, “from buffaloes to buttercups”.
His work, published in 1753 under the title “Species Plantarum”, put order in the randomness in which botany had been until then.

Without entering into detailed explanations of his fundamental contribution to botany, on which you can get extensive information, we are here to tell about his first plant hunting expedition and also some anecdotes of his private life.

When he was still a student at the Faculty of Medicine at the University of Uppsala, thanks to his vocation for teaching and his passion for plants, he was first appointed assistant professor of botany and immediately after that he accepted a thrilling invitation from the Academy of Sciences to take part in a plant hunting expedition in Lapland.
So he set off on a journey of hundreds of miles through unknown lands, keeping a daily diary and gathering plants to dry.
The expedition was exciting. Carl returned with a hundred unknown plants, wrote “Flora Lapponica” and fell in love with a girl who adored him.

And it is here that the girl’s father arrives, contrary to his daughter marrying a penniless botanical collector: Linnaeus has not graduated yet, so he is not a doctor and “has yet to settle down”. In the end, however, he accepts to pay the necessary expenses and, as soon as Carl receives the money, he decides to see the world a little more and to attend a university abroad.

And so, here is a hunter of plants travelling around in Northern Europe, but also a zealous young man in conflict with the community of old people of the city of Hamburg, guardian of an ancient and esteemed “seven-headed hydra”, relic of the crusades in the Holy Land. His scientific precision, in fact, prompted Linnaeus to ask permission to view that wonder and study it carefully: it was not difficult for him to prove that it was not a mythical creature, but simply the heads of seven cleverly sewn and treated weasels.
This triumph of scientific observation was not particularly welcome, as it inevitably led to the loss of the small but steady income that the elderly people obtained from public exhibitions. Carl became convinced that it was necessary to “change scene” and move away from a city that certainly did not love him.

After graduating in the Netherlands, he continued to refine his classification system and his botanical success expanded more and more.
Enjoying his fame and given his considerable reputation also in England, he decided to return to Sweden, partly because “someone” was waiting for him.
After returning to Uppsala, he made important discoveries, that is he was famous in Western Europe and was totally unfit for marriage and medical practice. In fact, his sweet bride turned into a demon within two weeks and as far as medicine was concerned, Carl confessed that he was “happier to handle plants than patients”.

Determined to leave Sweden, shortly before departure, he was appointed Professor of Anatomy at the University of the city. Although not interested in the subject, he accepted the chair and shortly after exchanged it with that of Botany, Medical Material and Natural History, that undoubtedly suited him most

The discovery of his real vocation as a teacher made him infinitely happy.