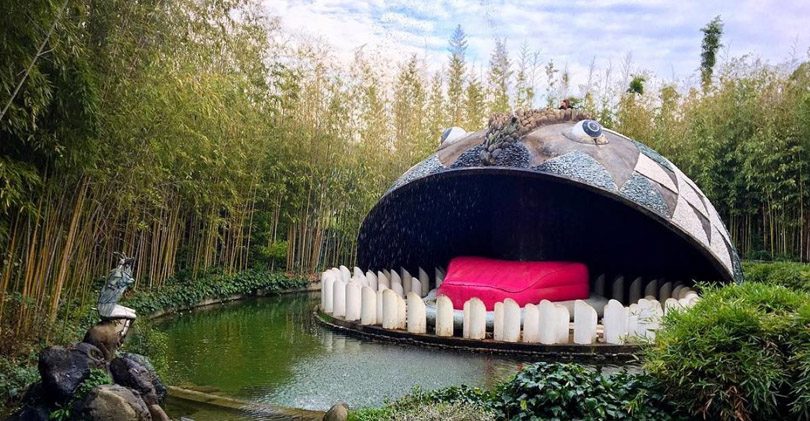 Collodi is a small town, before being the name of a writer.
To put it better, the writer’s name is a pseudonym taken from the village.
A small, beautiful, almost painted landscape.
And right there is a park, certainly magical, quite a disturbing one: the Pinocchio Park!

With a mixed soul, one hops from the museum to the playground to the monument.
Its birth is due to the mayor Rolando Anzilotti of Pescia, of which Collodi is a fraction, who in 1953 launched a competition for the construction of a monument to Pinocchio: equal winners were the artist Emilio Greco, with his “Pinocchio e la fata” (Pinocchio and the fairy), and the sculptor and painter Venturino Venturi, with the “Piazzetta dei Mosaici” (Small square of mosaics), on the garden project by Renato Baldi and Lionello De Luigi.
When both works were realized and finished, it is clear that, having abandoned the idea of a unique monument, doors opened to conquer the surrounding space, for something more complex than a single celebratory work.

A few years later the Osteria del Gambero Rosso opened, designed by Giovanni Michelucci: the union of decorative elements taken from the fairy tale with some leitmotives of Tuscan taverns and rural structures, together with those typical of his art. In particular, the radial ramified pillars appear here for the first time and will then become his signature.
But that’s not all. Subsequently the Paese dei Balocchi (Land of toys) was also created, project by the superstars Marco Zanuso and Pietro Porcinai, with 21 sculptures by Pietro Consagra and the constructions/installations by Zanuso himself.

Pinocchio’s adventures take shape: the space becomes park and the park becomes museum-game, because the world and the characters of a story and the dreams of the artists make it something unique.
Among the holms, the pines and the laurels of “Piazzetta dei Mosaici”, the olive trees, bamboo and ivy of Paese dei Balocchi, wincing, sobbing, astounding and snaking, the garden retraces Pinocchio’s steps and experiences: it is “steep, enveloping, intimate, sometimes impervious – a total anachronism with respect to the theme parks that would come later”1 to retrace the fragmentary tone of the story. As glades appear here and there, as in the fairy tale the mother scenes appear, Porcinai carves out “green rooms” in the thick wood from which Zanuso’s whale/shark, the long-legged carabiniere under which one must escape, the cat and the fox, the great puppet theatre and the pirate ship, the labyrinth, the pirate’s lair emerge.

Pay attention, visitors!
Pinocchio park is not a placid garden … “The shadow invades the space in all seasons, Pinocchio is also a story that takes place in the dark, which scares and redeems”2.
It also maintains and spatialises the nocturnal atmosphere, which strongly characterizes the story.
The external landscape, where the fairy tale takes place, is a winter and night Tuscan countryside, very often marked by hunger; the interior landscape maintains the same hues, between encounters with enemies and fears, metamorphoses, catabasis to the underworld between Fire Eater and the shark.
Speaking of dark atmospheres … It is no coincidence that the first version of the fairy tale ended with the death by hanging of Pinocchio himself, at the hands of the Cat and the Fox disguised as Assassins.

The park speaks of this: of the unexpected encounters, sometimes terrible, to which each clearing is dedicated, of a long night made palpable by the shade of the vegetation, but also of Pinocchio’s portentous vitality already implicit in its being wood, oxymoronically rigid and full of lymph, almost hyperactive, sometimes chaotic and mercurial, a metamorphosis, a process of “animalization”, a sort of re-immersion of the character in the organic world, making him retrace the evolutionary path leading from the pre-human to the human”3

Once upon a time … A piece of wood and its garden!