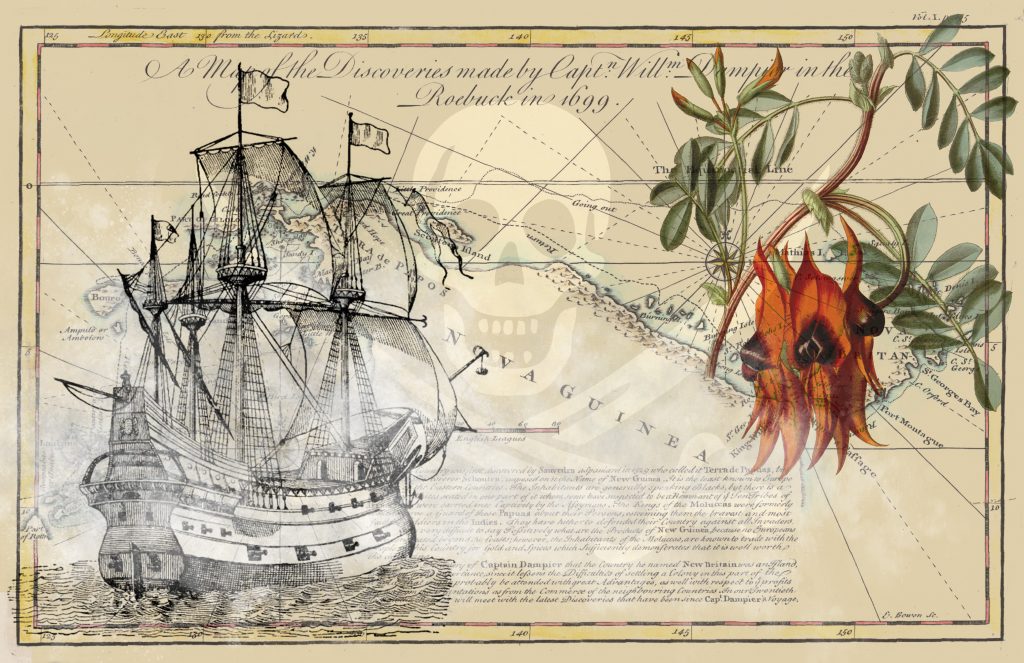 It is him, William Dampier, the most extravagant of all plant hunters.

Second half of the 1600s.
Escaped from England to sail the seas, the young Dampier starts travelling to Newfoundland, Bantam and Jamaica.

A bloodthirsty pirate and passionate botanist

A rebellious and undoubtedly singular character, he gets off the ship above all because of his great passion: botany. In fact, he collects many specimens and notes in his diary his observations on the flora of the places he has visited.
After years spent in the Yucatan, William decides to become a pirate and joins a group of buccaneers. He sows violence everywhere, but the passion for plants is always there.
He goes to Colombia, always with the sabre in one hand and the diary in the other. While collecting and examining specimens, he loots and sets villages on fire, seizes ships to finance his trips around the world. He gets to China, Australia and the Nicobar Islands, where he is abandoned by his crew on a beach.
This does not frighten him, so much that the strong temper and incredible tenacity lead him to Sumatra. His undertaking is incredible: he crosses the Indian Ocean aboard a canoe.

The charm of the traveller

Without going into details on how he managed to get help from the Dutch authorities, William returns to England, where the charming traveller, “captain” Dampier, is acclaimed and celebrated as a superstar. He also publishes the book “A New Voyage Round the World”, obtaining the esteem of the most important scholars of plants and thus becoming an authority on tropical and exotic flora.
His pirate past is unknown, so much so that the authorities entrust him with the command of an expedition to the South Seas to verify the possibility of colonizing Western Australia.

He sails as far as New Guinea, New England, towards the archipelago and the strait that even bear his name.
Botanically speaking, for Dampier the satisfaction is great: while his men seek fresh water in the archipelago, he goes hunting for plants and … “In this area two or three types of bushes grow, one of which is identical to rosemary, and for this I baptized the place the Island of Rosemary. It grows here in large quantities, but has no fragrance. Some of the other shrubs had blue and yellow flowers, and we also found two kinds of grains, like beans. The first type grows in bushes, the other on a sort of climbing plant that crawls on the ground. It has thick leaves and has flowers like those of the bean, but larger, of a very nice dark red colour”.

He discovers a plant that, in his honour, will be called Clianthus dampieri.

The adventures of Dampier are innumerable. He lead an unbelievable life, among travels, blood and plants.
Definitely not a gentleman, but a true novel character, so much so that … In “Gulliver’s Travels” the remark “rough sailor, but a man of exquisite mind” is dedicated to him. He also inspired Coleridge for “The Rime of the Ancient Mariner”.