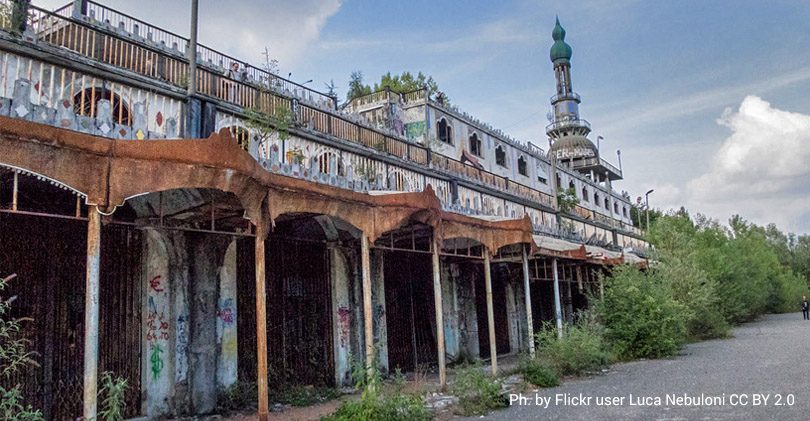 There is a place between Como and Lecco, eaten by grass and time, that seems to come out from “The Walking Dead” or “28 days later”.
It is a mix between “industrial archaeology” and the “charm of ruins”, extensively portrayed in the urbex photography, which is always looking for abandoned urban areas.
The place can be visited with some precautions – it is a private property and the buildings are abandoned – and is announced by rusty signs with slogans such as “Here everything is wonderful”.

Its original shape was completely different: an ancient medieval village with a church from the early Middle Ages, including farmhouses, chestnuts and celery, mule tracks and woods.
The toponym is already mentioned in a parchment of May 1085.

Then in the 1960s Count Mario Bagno comes and tears it down to make room for a “vision”.
The exciting economic boom prompts the eccentric and roaring Italian entrepreneur to build an extravagant micro world with its own characteristics: an Arab-style shopping arcade with a “minaret”, a dance hall, bumper cars and a “small restaurant”. Furthermore the Chinese pagoda and the “Bagno” missile, the panoramic train, the fountains and the luxury hotel, the medieval castle, the design of a racing circuit, the sphinxes and the Doric colonnades of the “Grand Hotel Plaza”.

The landscape on the lake is postcard-like and the location is enviable, so close to Milan, and just round the corner from Lecco and Como.
Within a few years the structure becomes “a must” to be visited on the weekend.
But the lack of attention to the hydrogeological context causes two landslides one after the other, leaving Consonno utterly uninteresting.

Thus the playground is forgotten and becomes one of the typical places abandoned by humans, vital however for a more hidden and silent existence, absolutely persevering, tenacious and vigorous: weeds!

What is a weed?

According to Richard Mabey:
“plants become weeds when they obstruct our plans, or our tidy maps of the world”.

The definition of weed therefore depends on the context: a plant is ornamental, but when it becomes invasive and intrusive, resisting and growing in an abandoned environment, is called weed, curative or food in a century, exiled in the other.
It is a plant that has grown in the wrong place, so much so that often the ill weed “is the victim of a crime of criminal association” and if it grows among the waste, it becomes a “plant garbage”.

But “What is the ‘right place’ for a plant?”
There is no right place, but certainly a suitable time.
The term “weed” is a label entirely conceived by humans. It carries a value judgment: weeds behave badly, because they are toxic or wild or reluctant to remain within specific cultural patterns.
According to Emerson, a weed is “a plant whose virtues have not yet been discovered”.
It is our point of view that is lacking, not their structure.

Often even those who love them risk – by transitive property – of being accused of herbalism, as happened in 1975 to the expert horticulturist Beth Chatto.
Helleborus foetidus, now loved in gardens, is typical of the woods; but when Beth first introduced it to the Royal Horticultural Society exhibition, she risked being expelled for proposing what, due to its humble origins, was classified as weed.

How can one become a weed?
For those who aspire to transformation, there are two fundamental ingredients: stubbornness, creativity and audacity.

A colonist from the State of Victoria tells:
“One day we came across a spear thistle growing next to a trunk, not far from the sheds of the stables, obviously a seed coming out of our horses’ forage … We wrapped it in a newspaper and put a stone on it. In a few days it was pretty pressed and we showed it with great pride. Who would have thought that, twenty years later, the spear thistle would spread to the new land, becoming a nuisance to the point that some districts and counties imposed by law its grubbing up?”

Fearless and inventive, weeds find endless ways of expansion.
In America, many of the weeds are immigrants from Europe: entangled in clothes, lapels and folds of fabrics, along with durum wheat, in hooves, on the mantle or in the belly of animals, they followed the roads or the train tracks to invade, land after plot, new lands, further ahead.

In the seventeenth and eighteenth centuries England is the crossroads of the intercontinental travels of these excursionists: attached to the other crops, inside pots or perched in travel cases, they invade the new lands. Once greeted with enthusiasm, useful as medicines and food, or simply beautiful, they soon became enemies to be eradicated.

One of the typical adventures of weeds is that of the Oxford ragwort (Senecio squallidus or senecio montanino).
It was first seen in the mid-18th century in the botanical garden of the Oxford University by Sir Joseph Banks, whom we already encountered in the hunt for the Peony moutan.

But how does it get to Oxford, considering that it grows in the volcanic lands of Etna?
Probably transported by some botanist on tour, or guest in vases travelling from Sicily, with seeds clinging to the roots of some other plant. Then from the Oxford garden towards the walls and beyond, it takes over the alleys, turns right, then left and right again, until 1830, when it arrives at the train station. From here it expands its horizons out of proportion.
One of the witnesses of the time, George Claridge Druce, tells how “The seeds followed the convoys, floating, sometimes even in the middle of the wagons”.
It goes from city to city, until the Second World War bombings rip its progress. Salisbury notes that it has become the third weed.
“It is 1944 and, according to the typical promiscuity of weeds, it gives life to a hybrid together with a narrow cousin, the Senecio vulgaris, generating what, renamed, is the London ragwort.”

So be careful … when you visit Consonno, you will notice all the biodiversity that is regaining ground. And it won’t be so bad.