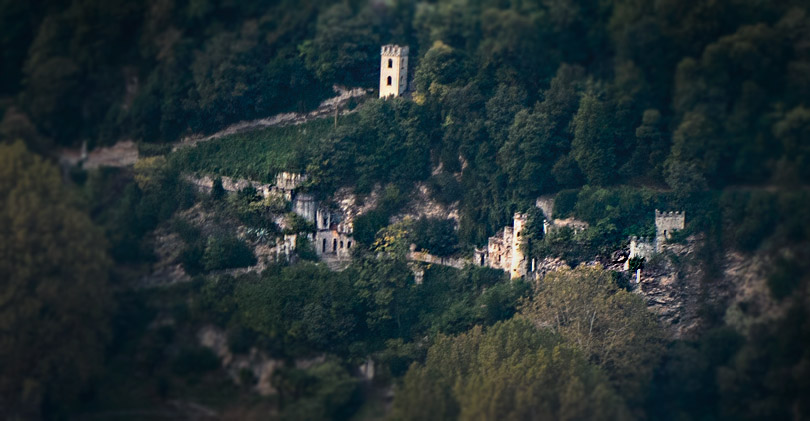 Detail of the remains inside the park of Villa d’Este. Ph. by Luigi Fieni flying with Heliduebi

Cernobbio (Co). Villa in Mannerist style, built in 1568 as a summer residence for Cardinal Tolomeo Gallio, and renovated several times.
The formal garden, stretching parallel to the building, features a long prospective avenue, a double water chain with cascades that is unique in Lombardy and a large late baroque nymphaeum in polychrome stones. A spectacular English garden.

Since 1873 it has housed one of the most renowned hotels in the world, but in a more distant past it was the home of aristocrats, princesses, marquises, sultans and tsars.
We will travel in time and bring you back to the early 1800s, telling the act of love of a woman.

Vittoria Peluso, wife of the Napoleonic General Domenico Pino and owner of Villa d’Este, decided to build the profile of Zaragoza, with its fortifications and towers, on the rocky spur dominating the park. A gift to her husband who had just conquered the Spanish city.
She gathered numerous workers, masons, blacksmiths and carpenters, who in a very short time built the structures, inventing innumerable tricks to delay as much as possible the return of the General, so that everything would be ready on his arrival.

Obviously Vittoria organized a welcome to her husband, with suggestive decorations and fireworks: legend has it that she waited for him, in an elegant white dress, at the top of one of the towers.

Today the remains of this work are visible, not only from inside, but also travelling on the Via Regina.