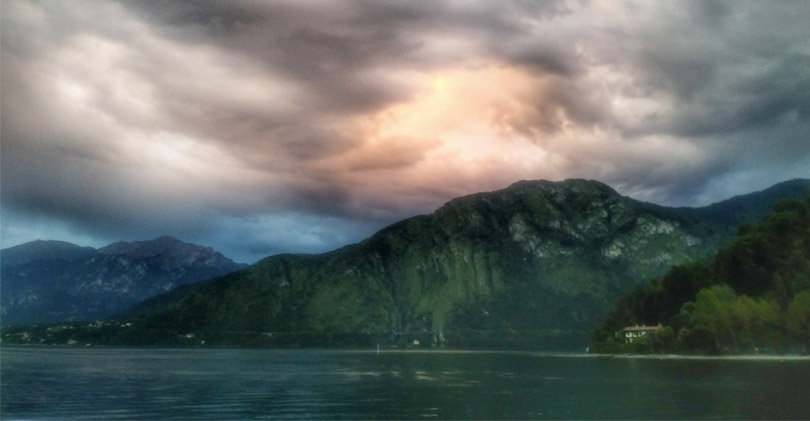 One day someone said “Legends contain hidden and indisputable truths that accompany us in our social evolution and that each of us unwittingly welcomes and accepts”. A thought entering the ancient meanders of our culture, between reality and fantasy.

In the folktales surviving over time, traits and nuances stand out and form the substance of a lost truth. With them and in them the noblest memories of a lost reality are recalled.

It is with these stories that at the beginning of the 19th century, the naturalist Carlo Amoretti becomes convinced that on the mountains around lake Como big lizards exist: they love to suck milk from cows, are more than two meters long, have a stocky tail and four short legs (sometimes two according to other sightings).
He is so impressed and fascinated by the local histories that he mentions the mysterious snakes in the fourth edition of his “Viaggio da Milano ai tre laghi Maggiore, di Lugano e di Como” (Journey from Milan to the three lakes Maggiore, Lugano and Como).
In the following decades the sightings increasingly populate the stories and places between mountains and lake, such as Garzeno and Rezzonico.

It is the golden age of the tatzelwurm, as defined by cryptozoologists.
The legendary “snake with paws” is metioned in dictionaries, alpine almanacs and magazines.

Our landscapes, alpine and subalpine, are the scene of these legends, among large saurians and giant lizards roaming the wild woods.
Who knows if the “curandere” of the nineteenth century, who know the secrets of the poisonous plants, who knows if the “erburari” of our mountains, ever met the tatzelwurm while wandering through the Larian forests.

Imagining the squat-tailed lizard wandering in the landscapes surrounding the lake, between chestnut and hornbeam, while climbing the slopes of the mountains between beech, fir, larch and pine trees, in the grasslands at the edge of the woods, is an invitation to retrace those ancient and fragrant paths, with attentive eyes to the most incredible encounters.
From orchid to dittany, from hellebore to wild onion, from rampion bellflower to silene and who knows … until crossing, between a leaf and a petal, the gaze of the shy snake.

(…) “For us, the forest continues to be the limit of order, the insurmountable border of a civil society that for centuries has done nothing but dominate it, mechanize it and which (Carlyle tells us) has made us “workshop intellect and heart, as well as arms”. Yet, just as we continue to manipulate the space, perfecting it and sewing it on ourselves, the forest resists and attracts us: a private universe with many ways out or a place of regeneration, the forest feeds constant ethical and aesthetic reflection in us”. (…)
(from the afterword by Stefano Brenna in “La consolazione delle piante” (The consolation of the plants) by Pietro Testori)

Let’s go into the woods.
Let us be tempted by suggestions, by the legendary universe of stories, treasure chests of memory of places and traditions, custodians of the archaic and ancestral charm of a nature and culture to be preserved and protected.