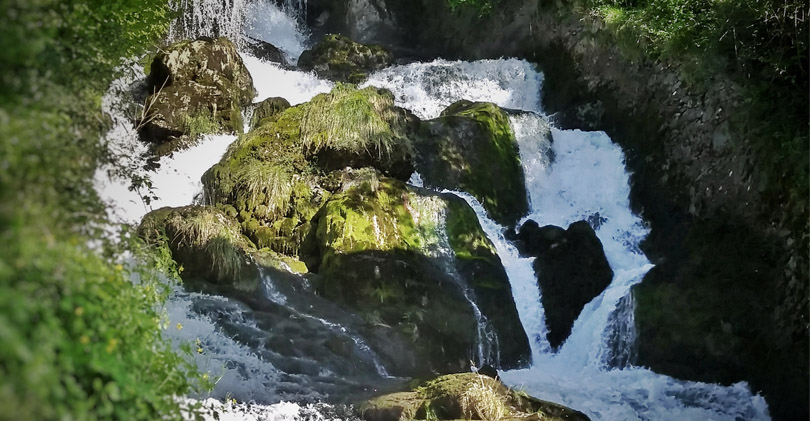 The stream that appears and disappears

Short, but intense, white and mysterious, ancient and legendary.

It is Fiumelatte, the second shortest stream in Italy, appearing and bursting with its blinding whiteness into the landscape of the homonymous village.
It comes out of a dark carve in March, and disappears in October, retreating into the depths of the mountain that holds its secrets.
250 metres of white water, so impetuous and foamy that it flows through the dense vegetation, between cyclopean boulders and old fishermen’s houses and dives into “That branch of Lake Como, which extends southwards between two unbroken chains of mountains, and is all gulfs and bays …”.

Its intermittency is attributable to a system of karst channels, whose upper conduit is the cavity from which it flows, due to a phenomenon called “overflow”.
This bizarre “behaviour” and the source, hidden in a labyrinth of tunnels and caves, have fascinated explorers and scholars for centuries: from Leonardo da Vinci to Girolamo Serra, Amoretti and Spallanzani, and writers such as the French Antoine Claude Pasquin, called Valery.

Between legends and traditions

With his “tremendous roar and noise”¹, the stream draws, together with its unattainable source and the cave, with the village and the wood, a legendary landscape, theatre of the tales of crazy young people, disappearances, fairy kingdoms and maidens.

Starting in November, in the dry months, it was tradition for the inhabitants to collect the soft moss covering the bed of Fiumelatte, which was precious for the preparation of the cribs.
A forgotten custom, which therefore we want to remember, perhaps walking along the path going up from the village to the cave from which the stream comes out.

In recent chronicles, speleologists have gone beyond previously insurmountable limits, going deeper into the mountain to discover and explore an impetuous underground stream that continues its run towards the sources, through a deep gorge.

But the source of the “Fiumelaccio”² is still further, in the depths of the Grigna.