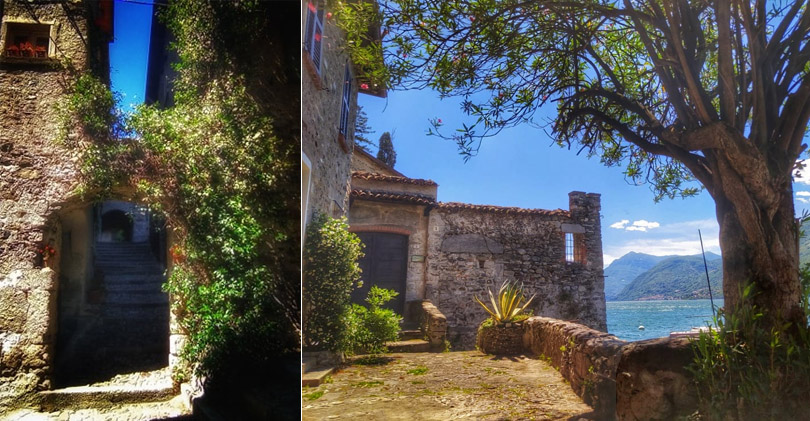 A village on the lake

Clinging to the mountain rock that dominates it, Corenno Plinio is an ancient village on the Lario.

It is one of the stages of the Wayfarer Path (Sentiero del Viandante), a hiking path between mule tracks winding for over 40 km from Abbadia Lariana to Colico, on the eastern branch of Lake Como. It traces the ancient Via Regia that connected the coastal villages.

It is said that the Roman consul Caius Pliny loved to vacation here. How to blame him. Indeed, we agree with him.

Its history is medieval, its origin is Roman, maybe Celtic.
And as in the most fascinating fairy tales, it has a fourteenth-century castle, built to defend the inhabitants and their livestock from attacks or dangers.

The maze of narrow streets, steps carved into the rock, passages swallowed up by the shadow of stone houses, going down to the lake to regain its own light, that of the lake, always different at every hour and in every season.
Its atmosphere is calm, but pulsating, capable of inspiring poets and painters.

The descent towards the lake

A meeting upon each step: first with a large pink hydrangea, then with the plants and the flowers of the small balconies and windowsills, and then with a few native eyes behind the half-closed shutters.
In the streets that get lost into nothing jasmines climb up old walls.

And then down, even further down, up to the pier, the lake.
That is perception. No need to describe it, it is too personal, like the same perfume on different skins, like the same landscape in front of different eyes.

A mixture of lake and sea, of fishermen, of stone exuding history, of coloured doors beyond which one would like to go, maybe to find secret gardens.
The embroidery of the vines on the facades competes with agaves and large oleanders brought by who knows who.

Meanwhile the silence of the lake speaks.
A special silence, a transformable one.