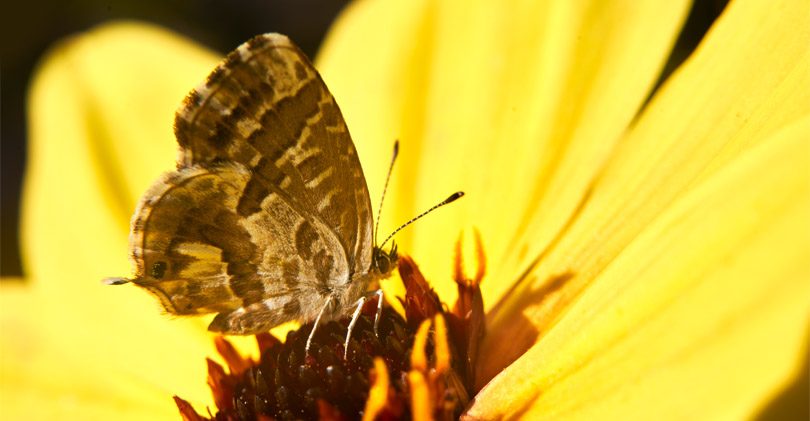 “(…) The butterfly does not live to feed and grow old, lives only to love and conceive, and for this reason it is wrapped in a wonderful dress, wings that are much larger than the body, and that in the shape and colours, in the scales and in the hair, in a extremely varied and refined language, expresses the secret of its existence only to live more intensely, to attract the opposite sex with more magic and seduction, to celebrate the feast of reproduction in a more sunny way (…)”
(Hermann Hesse)

Butterflies, a life of love and wedding dances

Hermann Hesse’s words to fly with the people of the meadows, from one flower to another, to peek at their love habits and observe their wings, instruments of seduction and defence, masterpieces of evolution created in almost 60 million years by two artists, a ‘designer’ gene and a ‘painter’ gene’1.

The rituals, the wedding dances and habits are different from one species to another, but mating is a very serious event for all and can last all day and all night.

Beautiful and delicate, but combative and ruthless in defending their “loving territories”, so important for their survival.
Incredible dancing creatures in search of love and the nectar of flowers. For millennia they have excited the imagination of man, who has transformed them into symbols, myths and legends.

Night and day at the mercy of the senses

So ephemeral but intense their love life, an existence in which the game of the senses is transformed between day and night.
The sight guides the daytime creatures and lets them detect a companion, while for the nocturnal moths it is the scent of females that tickles the sense of smell in the male’s antennas, even from considerable distances.

And then the sense of taste, which for many is satisfied by the sugars contained in the flowers: the sweetness of the nectar is an object of desire and therefore requires an accurate tasting through their legs. Only if they are satisfied do they feed on them, unrolling their spirits in their proboscis.
But not all are attracted to sweet flavours, there are alcohol lovers, who prefer to get drunk with fermented drinks from ripe fruits fallen on the ground, others who like to quench their thirst with swampy waters.

The wings, between seduction and defence

The butterflies are brilliant, they defend themselves from predators with artistic shrewdness, the result of a very ancient natural selection, which has chosen the best individuals, even the most virtuous ones.
They sport colourful wings to seduce, camouflage to disguise themselves in the colours and shapes of the environment. Sometimes the upper part of their wings has bright colours, but when resting on the trees, to become invisible to the enemies, they show the lower part, identical to that of a leaf, even equipped with a stalk

The symbolism of the butterfly, the stories and legends inspired by it, are present in many cultures and have very ancient origins.
Archaeoastronomy studies confirm that the ideogram of the butterfly has prehistoric origins and represents the transmigration of the soul to the sky, its return to the generating constellation after the earthly permanence: a symbolism found in different parts of the world, such as from north to south of Italy, where megalithic sites, statuettes and engravings have been discovered and studied.
For ancient Greece the butterfly is the personification of the soul’s breath in the very term that defines it: psyche means at the same time soul, butterfly and vital breath.

In many languages, however, uncertain and shrouded in mystery is the origin of the name of this seductive creature.
It is believed that its etymology derives from typical expressions of the ancient figurative language: butterfly, in English, is literally “butter fly”, maybe because of the delicacy of its body; among countless other hypotheses, however, the most imaginative is to be found in a popular legend according to which prank fairies, taking on the appearance of butterflies, fluttered in the pantry of the houses to steal butter.

In Calabria, in some Sila villages, there is sacred respect for butterflies, where the souls of Purgatory are believed to be hosted. When a butterfly wanders around a lit lamp, it is said that it is a spirit in pain seeking peace2.
According to the culture of the Tohono O’odham, native Americans of the Sonora desert, between the United States and Mexico, butterflies were created to be messengers and bring to the Great Spirit the wishes expressed by his human children3.
Even in Ireland the souls of the dead are believed to be butterflies, and under their features, according to a Celtic belief, the spirit leaves the body during sleep.

In the “Dictionary of symbols, myths and beliefs”, Corinne Morel states that the butterfly represents the initiatory metamorphosis, a celestial and spiritual symbol. It materializes the transformations of the man, who rises and soars up, his possibility to pass from the terrestrial condition (caterpillar) to the celestial condition (butterfly).
Precisely for this reason, the creatures of fairy tales and legends such as fairies and elves are represented with butterfly wings4.