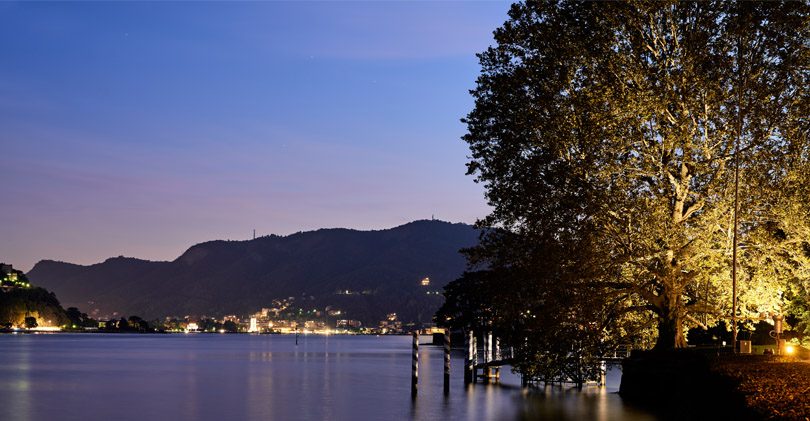 Ph. by Luigi Fieni. The big plane tree at the pier of Villa Erba.

On Lake Como the plane tree is one of the protagonists of the landscape.
And so it is at Villa Erba, where every year, under the autumn foliage of incredible specimens, the landscape of Orticolario materializes, made of nature, people, installations, events, sensations, stories.

The “long-branched plane tree”, a force of nature. One of its very long branches extends horizontally towards the lake, defying all physical laws. Almost completely incorporated, an ancient ring emerges from its camouflage bark.

Magnificent is the specimen that shades the landing stage: in autumn it loses its leaves and shows its nakedness, leaving on the ground a thick blanket of golden yellow leaves, as is the case with the group of giants in the Golfo Platani, where, extraordinarily, two trunks “incorporated” one into the other.

But before telling the legends of this ancient seducer and the crazy things done for it by men, kings and illustrious characters … Did you ever walk and try to move through the many, crunchy and thick fallen leaves at the feet of a plane tree? Do it … You will like it. It is a joyful and powerful anti-stress method.

A plane tree for every pleasure

Originating in western Asia, where it grows in the mountains and descends to the plains following the bed of the streams, it spreads over the centuries throughout Europe and in Italy from 390 BC.
Long-lived, with an enormous crown of jagged leaves and a well-formed trunk, it has been loved since ancient times.
From the Greeks, attracted by the coolness of its great shadow and its beneficial powers against bats, snakes and scorpions, up to the Romans, who contribute to its slow spread.

Whatever the species, it is to die for: orientalis, occidentalis or the fertile and resistant acerifolia, born from the spontaneous crossing of the first two in the Oxford botanical garden in the mid-1600s.

The beauty of the eastern plane tree, considered the sacred tree of Lydia, conquers Xerxes who, covers it with gold ornaments and has it guarded day and night by his “immortals”.
It enchants Greece, where it is considered belonging to the Great Goddess, the Mother Earth, and expands from Crete to the Peloponnese, where it populates sacred woods.
Because of its “spotted” bark in continuous metamorphosis, it is a symbol of regeneration and writers, philosophers and artists of the Academy of Athens discuss under its branches.

The tree is also assigned an oracular role in the prelude to the Trojan war: the Spartan Pausanias, Leonidas’ brother, assures he saw Cafie, in Arcadia, the plane tree planted by Menelaus before his departure for the war; in Delphi a specimen is shown that, in the same days, Agamemnon would have planted near the sacred source Castalia.

It is thought so highly of that, in Rome, the orator Ortensio nourished a plane tree with wine, convinced of the benefit the plant could derive.
It becomes a must also in the political sphere. In the region of Lycia it is the ideal place for important events: in a specimen with a large hollow trunk the consul Marco Licinio Crasso invited his guests who“were laying on beds of leaves generously provided by the tree itself “.
The eccentric Caligula instead organized an important banquet in Velletri in what he liked to call “the nest”, an enormous and very old plane tree, whose branches were used as seats.

Still today, scattered in Europe and in Western Asia, there are some millennial plane trees.
In Turkey, near Istanbul, the story has it that among the plane trees of the “Seven Brothers” forest, there is one that hosted the tent of Godfrey of Bouillon in 1096, during the first Crusade.
The Greek tradition tells that a giant tree on the island of Kos, born in the same place where its eminent ancestor stood, is a direct descendant of the plane tree under which Hippocrates, the father of medicine, used to teach his students 2,500 years ago.

Between history and myth, the importance of the role of this tree for man is evident and invites us to reflect on our sensitivity towards nature. Do the most bizarre stories attest the story of crazy people or simply a different vision of the plant kingdom? Meanwhile the plane trees are still here and it all depends on how we see them.