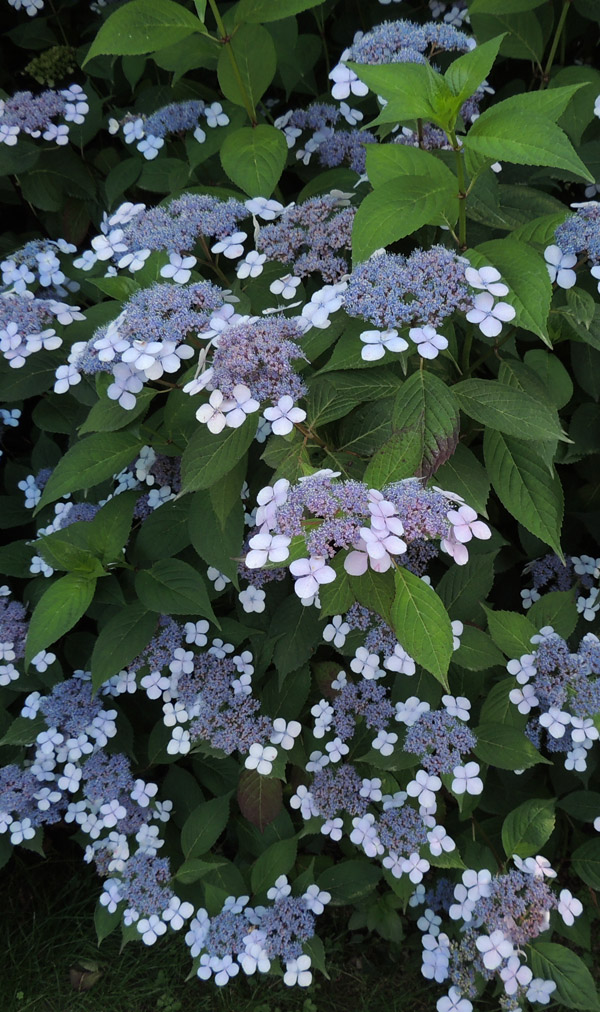 Every year I eagerly await the full moon at the end of May, or, should I say , the week of the waxing crescent between May and June.

I need its light to admire the evening reflections games on a hydrangea in the garden, on my ‘Bluebird’. The sky must be clear, clouds must not interfere.

At the end of May, this beautiful and lastingly successful bush, born from hands of an English hybridiser, takes shape and it covers itself with small, flat inflorescences.
Admittedly, its leaves have thin leaf blade, they are not exactly lush, although the leaf apex  is elongated and the leaf is engraved, clear, well-contoured: they are not the classic hydrangea leaves, thick and shining,  but, as it belongs to the more rustic species Hydrangea serrata, it more easily tolerates hours of direct sunlight which will paint the leaves a hot red during the Autumn.

Dozens of inflorescences open around its  heart, a pillow of minuscule fertile flowers, which, in turn, is surrounded by a discreet and perfectly balanced crown of sterile flowers. Every flower has four lightly-elongated  drop- sepals: they are outstretched, well-spaced, in a cross shape. It is impossible not to recognise them among many.

The alchemic relationship which binds its pigments to the soil and the water around it makes its colour a light blue which has a soft albeit definite tone during the daytime:  interesting though rather plain compared to bigger and more garish hydrangeas around it. Instead, under the moonlight, the bush suddenly lights up . A vivid light blue unexpectedly flows from the flowers, forming a blotch, sometimes white, sometimes greyish, glimmering at every gust. It is an incomparable flash among the shadows on the ground while all the rest disappears in the darkness of the garden.

Then I stand still, storing in my mind a colour and an image that no photograph will ever capture, as if the Moon were there, pale and white, but within my arm’s reach, right until the maple tree over the “Bluebird” sends its shadow to close the scene.

I know that the glimmering light of the ‘Bluebird’ is released through a simple reaction in the Sun…
that light has travelled aimlessly for eight minutes, covering 150 million kilometres within interplanetary space before accidentally meeting  the mirroring Moon…
that the same light  has changed direction, and in one and a half seconds has raced 380 thousand kilometres…
that when it cuts the finishing line on these sepals, it will cast its magic spell.

Eva Boasso Ormezzano is a passionate Hydrangea collectionneur, researcher and author of many publications.  She’ll be among Orticolario 2017 guests.