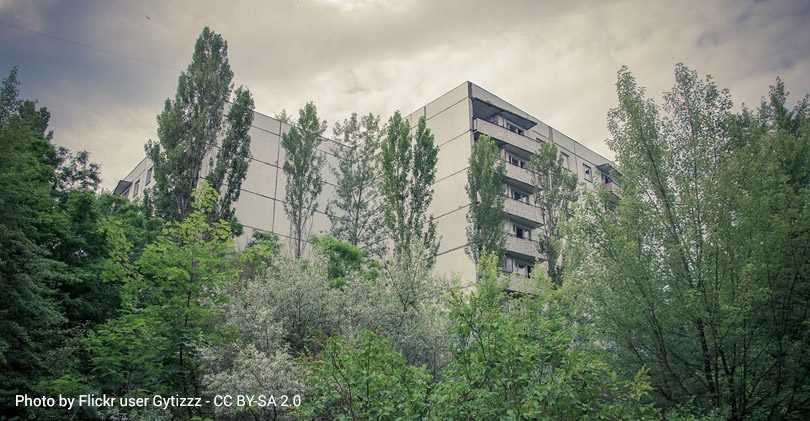 “And this our life, exempt from public haunt, finds tongues in trees, books in the running brooks, sermons in stones, and good in everything”.
(William Shakespeare, “As you like it”)

That plants were extraordinary and super-heroic beings we have been saying it for a long time, but being able to remedy atomic disasters looks like a Marvel hero quality.
From Chernobyl to Hiroshima, plants are showing a powerful will to live: a mixture of resilience, fluidity and capacity for rebirth.

The Red Forest of Chernobyl

The evocative name “Red Forest” does not indicate an area of some remote region of Northern Europe or a magical forest in the style of “The Lord of the Rings”, but a pine forest of about 4 km2 that immediately after the Černobyl “accident” turned suddenly to red, and then died.

It was one o’clock in the morning, 23 minutes and 46 seconds when the unthinkable happened.
A series of violations in the security protocol created a frightening domino effect: in the reactor No. 4 of the Vladimir Il’ iČ Lenin nuclear plant near Černobyl, the temperature of the core sharply increased, causing the refrigeration water to break down into oxygen and hydrogen which, in contact with the incandescent control rods, caused an explosion, the uncovering of the structure and a vast fire.
Thus it was that a cloud of radioactive isotopes dispersed, reaching as far as North America and over a very specific area.
It fell upon a definite area, causing destruction and contamination.
That is the “Zone”, covering about 30 km2 from the zero point, the nuclear reactor.
It was immediately evacuated and abandoned and here, as birch and poplar forests survived, the pine forest turned into the Red Forest.

30 years later we know that something else happened.

Man left and the “Zone” turned into a sort of involuntary Natural Park.
Now, without human beings, animals like lynxes, raccoons, roe deers, Przewalski horses, birds, elks, deers, roe deers, wild boars, red foxes, badgers, weasels, hares, squirrels, brown bears, endangered species are coming back.
The wolf population is seven times greater than that of the surrounding uncontaminated areas.
Now, without man, it seems that the area, uninhabited by our species, is as populated by other ones as it has never been.
Now, without man, plants are literally invading, as in a post-apocalyptic jungle, even the regions most affected by the nuclear fallout. They grow on the roofs, pour onto the terraces, break the asphalt, tear open the walls, take over six-lane roads.
Like a phoenix, that territory is now one of the areas showing the highest biodiversity of the former Soviet Union.

And that’s not all.
They are cleaning up from radioactive waste through their unique ability of absorbing radionuclides from air, water, earth. This process is defined by an emblematic term: phytoremediation.

The Red Forest is turning into an Eternal Garden: as now earthworms, bacteria and fungi are not present, the natural process of rotting is extremely slowed down. Leaves and plant residues remain on the ground for a time that seems, to our eyes, eternal.

The only real enemy is fire. As they absorbed all that fell from the air to the ground, the plants turned into boxes of radioactivity: the Red Forest and the Eternal Garden must not burn. Never.

Although it looks like a quote from Ian Malcom, life always wins.