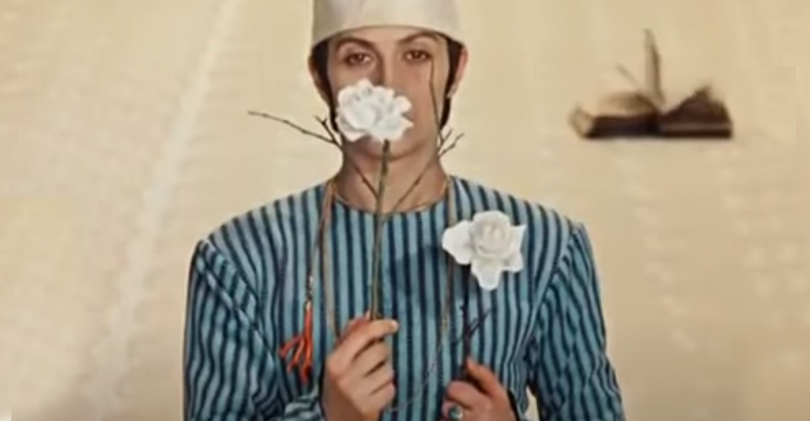 A scene from “The colour of pomegranates”

In the cinema of poetry

In autumn we like to talk about pomegranate, its symbolism and an extraordinary film, whose title is linked to the passionate colour of its juicy “rubies”.

The 1968 film is “The colour of pomegranates” by the surrealist director Sergej Paradžanov, born in 1924 in Georgia of Armenian parents.
It is the biography of the greatest Armenian troubadour poet of the eighteenth century, Sayat Nova, whose life Paradžanov retraces in an original way, through a series of tableaux vivants.

The film was censored and immediately withdrawn by the Soviet regime for “extreme deviation from Russian realism” and even risked being burned.
Each scene is a picture, between allegories and metaphors, very few dialogues, a sound with attention to the smallest details, including songs, noises and traditional Armenian music.
The pomegranate is the very symbol of Armenia, represented in ancient manuscripts and depicted in the khačkar stone crosses, together with the grape and its branches.

The powerful symbolism and virtues of the pomegranate

A fruit that is a symbol of health and abundance in many cultures, of fertility, joy and love, an expression of the exuberance of life.
The painters of the fifteenth and sixteenth centuries often depicted it in the hand of the Child Jesus as an emblem of new life.
In Coptic art, the tree represents resurrection, while in Asian culture the fruit showing the seeds symbolizes abundance and good omen. In Dalmatia, an ancient tradition has it that the groom brings a pomegranate plant from the father-in-law’s garden to his own, so that the marriage is lasting, happy and fruitful. In the language of flowers it means ardent love.

A precious gift of nature, native of Persia and Afghanistan, widespread in the Middle East and the Mediterranean. With infinite virtues, already discovered in ancient times by the Egyptians, it is considered aphrodisiac, diuretic, tonic and extremely beneficial from a cardiovascular point of view.

The film in full version with Italian subtitles
Enjoy it.