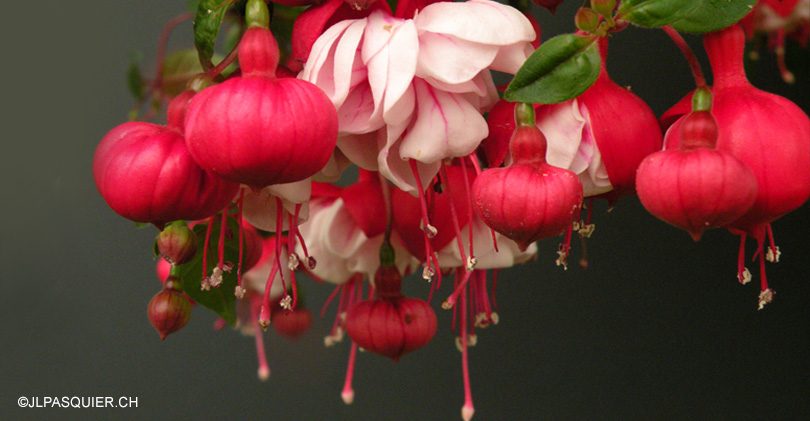 Fuchsia flowers have a lot of  names: Lady’s Eardrops, Fuchsia Angel Earrings, Earring Flower, Hardy Fuchsia, dancer with a shining tutu. According with Alfredo Cattabiani they hang “as a cascade of elves transformed in plants”.

Where did they came from?

In the 1693, Charles Plumier, a French missionary, came back from Mexico, and he revealed the existence of that beautiful dancer to the world, sketching a rough draft.
Historically the flower should have to bear the name of the discoverer, in this case of him, but he decided to dedicate it to Leonhart Fuchs, father of one of the most important European herbal in the previous century. Here we are, Fuchsia was born.
It would take a century before pretty “elf” would become a beloved and fashionable flower.

From what is known, the boats which began the Fuchsia history are two.

The first is the one of Captain Firth who carried the flower on his boat, sailing back from South America. Puff! There it is: in the late 1700s it appeared within the Kew Gardens of London.

A few years later, James Lee, famous cultivator, passed by carriage through a small village close to London and saw a garish and very coloured Fuchsia, growing in front of an house.
Stunned, he stopped the horses, get off from the carriage and asked to the owner:
“Incredible Madam. Whoever brought you such beauty? I will pay you a considerable sum to possess it!”
“No dear Sir, this was brought to me by my son from America”
(We like imagining such a conversation)
Lee asked to the dear lady to have some twigs which, as a good cultivator, he was going to reproduce. So his nursery became famous,with a coming and going of lovers for the pretty plant, called in Brazil “beautiful bush”.

In this way its colour, a mixture of pink and violet becomes our ‘fuchsia’.