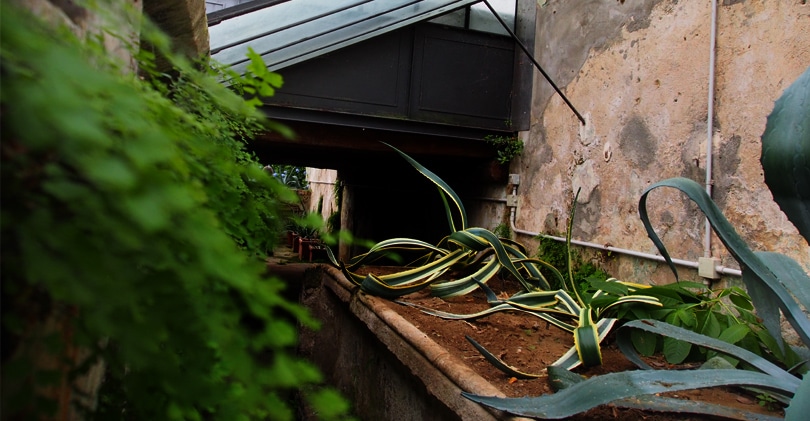 Abandoned villages and mountains, bordering and liminal areas, between the highways, where weeds and strange things grow, houses invaded by Nature, and then climate change, floods and periods of drought. But how can gardens be made now? With the eco garden.

The Third Landscape and the sense of abandonment

It is very probable that by now you have heard abundantly about the Third Landscape. But what is it? For Gilles Clément, its founder, it is “made up of all the places abandoned by man”.
It consists of liminal, residual, uncultivated spaces that take back possession of themselves, where biodiversity and the uncontrolled reconquer space, no longer having a specific human function. Buildings can turn into ruins, but never rubble, sometimes following the trend of “ruin porn, when they become an object losing contact with society, with the past and the future”. In short, pure aesthetics.
These liminal spaces become incubators, “shelters” as Clément defines them, both of biodiversity and diversity, places of rebirth of a new type of relationship with the different.
Here we discover that the abandoned spaces are not empty at all, but are free, without man, full of what is not human: insects, weeds, lack of control and human aesthetics.
The etymology of the word declares it: abandonner “to make it available to everyone”, where everyone is not just “we”.

The third way: the garden and the landscape of care, between abandonment and exploitation

“Nature, or Pacha Mama, where life is reproduced and occurs, has the right to integral respect for its existence and for the maintenance and regeneration of its life cycles, structure, functions and evolutionary processes. All persons, communities, peoples or nationalities will be able to require public authorities to respect the rights of nature”
(Constitution of Ecuador)

New ways of communicating with nature are emerging, or at least, for us and for our culture, “we are all naturalists”, are coming from “3/4 of the world”, who behave differently from us.
According to Nadia Breda, cultural anthropologist, there is in fact the scent of a conceptual passage in the air. From a nature perceived as an object from a window, to be opened and looked at – this trend includes integral reserves in which man cannot act – a vision of nature as a “river” is being regained, where we are immersed, where we cannot perceive ourselves as separate, where the differences and similarities between human beings and non-human beings, be they trees, stones, insects or rivers, are much more nuanced and difficult to pigeonhole, where everything is connected.
We are regaining an animist vision, in which “the others that I find in the Third Landscape have their own interiority with rituals, their own family, etc…”
Here, in this vision, the trees recognizing their daughter plants or their family members and helping them, acquire, in our eyes, a greater meaning; they do not seem like theories of crazy visionaries, but discoveries that shake an anthropocentrism, by now old-fashioned and turbid.

This is how the new legislations in which nature becomes the subject of legal rights and no longer a passive object, as in Ecuador or New Zealand where the Whanganui river has a real legal personality, no longer sound like the fruit of science fiction.
It is a paradigm shift, which brings us closer to the landscape: from a museum immobility to the recovery of an ancient and inner respect.

In Italy there have been niches of animism since ancient times, which are now regaining value and being rediscovered: an example of this is the collector of stones from the Piave river, capable of distinguishing the good stones to be taken to the furnaces to obtain mortar.
In an interview, Breda tells how the stone collector needed to wait for the river water to become feminine, for it to fall in love, for it to become fertile in order to mix the stones.
“The cycle of collecting stones had to be carried out by water and men together. It stirred, they sifted. It mixed, they divided. It spilled, they collected”.
Post-humanism, says the anthropologist, is a relationship between humans and non-humans, a bit like that of the stone collector.