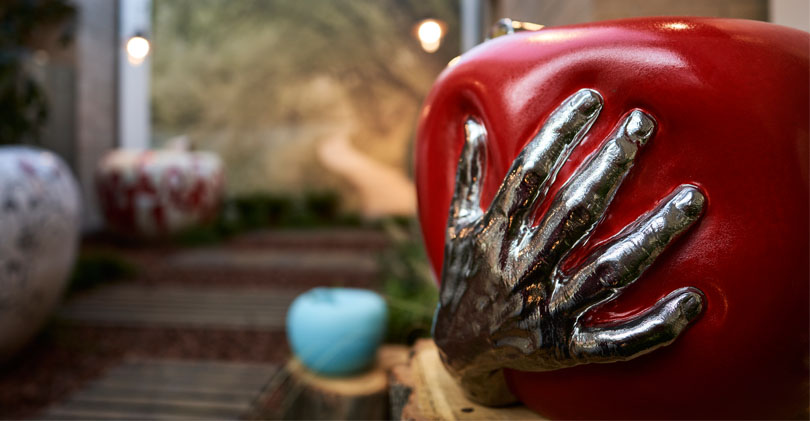 Ph. by Luigi Fieni. DehOr Space “The garden of Eve, the Apple of desire” (Orticolario 2019)

“Colour, like beauty, is in the brain of the beholder
(from “The secret life of seeds”)

The futuristic case of the appearance of the red colour

The apple is so seductive: round, juicy, firm and sparkling. Next thing it will be winking at us. But it wouldn’t have been so sexy, if it hadn’t also been red.
There is a historical moment in which the apple and its colour enter human history. It is just then that its career as a sex symbol began.
We must go back to the age of dinosaurs. Yes, they are the ones.
Everything began when mammals conquered the earth.

During the Mesozoic era, when dinosaurs dominated, mammals were nocturnal insectivores and their sight was tailored to their diet. When the reptiles disappeared, all mammals came out during the day and their diet changed, the fruits thus becoming their main course.
Their two-colour sight, unable to recognize colours in the intermediate band of the light spectrum, such as green and red, was functional for night vision (at least so it seems from the latest studies). In other words, they did not perceive the two colours.
Reptiles and birds (even goldfish!) instead had a four-colour sight, which allowed them to recognize ultraviolet rays. With these “super powers” it was easier for them to distinguish the small fruits in the midst of the vegetation (like the birds that are able to see blueberries), while our ancestors were not very good at differentiating an apple among the leaves. How unfortunate if the diet is based on fruits!
But here comes nature with its enormous genetic creativity: the females of the monkeys of the New World became carriers of genetic variations, such as to allow a three-colour vision that perceived blue, green and red. Voilà … the red fruits and our apple finally stand out among the foliage.
In the end, in a very complex process of chromosomal errors and in DNA, the super powers of our ancestors allowed us to fall in love with our sex symbol.
Speaking of “tell me what you eat and I’ll tell you who you are”, “Diet seems to have played a role in the evolution of three-colour vision in both primate groups in which it occurred. In howler monkeys it appears to have been driven by their taste for young, red leaves. In Old World primates it was their diet of fruit.”1

The apple, fruit of desire

“For the ancients, the fruits were gifts from the gods”2, so much that they had deities dedicated to the supervision of ripening.
The Greek term mēlon, from which malum and then apple derive, was used to indicate all the exotic fruits resembling the apple. Mēlon kydōnion, that is quince, came from Kidōnia (Crete), Mēlon persikón, the peach, originated in China, but was discovered by Alexander in Persia; Mēlon armeniakón, the apricot came from China but was first seen in Armenia, Mēlon kítrion was the lemon and mēdicón the cedar.
The apple tree becomes the symbol par excellence of this role, the quintessential fruit.
When Hercules, for his twelve labours, is asked to capture the golden apples, he is actually asked to conquer immortality and its bearers, the symbolic round and juicy fruits. They hang ripe from the sacred apple tree of Era in the Garden of the Hesperides, on the slopes of Mount Atlas, where the sun’s horses finish the race, places that no one dared to violate and that were protected by Ladon, the dragon, the great snake.

An so the apple embodies the conquest of immortality or knowledge, an aspect that is also evident through various legends and myths.
Alexander the Great, looking for “the water of life” in India, discovered apples that would extend the existence of his priests up to 400 years, likewise those of the goddess Idun in Germanic mythology that stopped aging, while the mythical Avalon is called “apple island”.
The apple tree is also one of the epiphanies of the Great Mother, represented while holding in her hand the golden fruit won by Aphrodite in the famous judgment of Paris. It is no coincidence that it is conquered precisely by the most sexual and seductive divinity of the whole Greek pantheon. As much the goddess represents love and physical attraction, but also the plethora of harmful consequences of such an attraction (in most myths the goddess’s lover dies after the embrace and Aphrodite collects a series of names that connect her to the underworld,3 so much the apple takes on a whole series of symbolic nuances not only erotic and seductive, but also dangerous and destructive.
In the first case its shape suggests a breast or belly, which seems to have even a navel, while in the second one it becomes the emblem of attractive and dangerous seduction. The apple is in fact a symbol of love and sex, but also of discord. “The apple tree, the tree of knowledge, can also be the tree of blindness, the tree of life, and also the tree of death”4
Let’s not forget that the apple is the dangerous Snow White’s death trap!

The apple, the fruit of sin

It is only a short step from being a dangerous sex symbol in the Greek and Roman world to becoming the demonic temptress par excellence in the Christian world: the snake had offered Eve exactly one forbidden apple, fruit of the tree of knowledge, thus making her and Adam lose the first place on the podium of God’s preferences.
For the Catholic world, in fact, the identification with the apple of the forbidden fruit of Paradise is automatic.

Unfortunately the story is not that simple! (of course).
Our apple suffers an unfortunate fate, also due to a translation error.
In the Old Testament passage, the identity of the forbidden fruit, which was most likely a fig, is not revealed, but owing to incredible circumstances it seems so simple to identify it with our beloved red apple:
«when the Bible was translated into Latin, the word malum contained in “tree of good and evil”, which means both “evil” and “apple” (even if the first one is mălum and the second one is mālum) mislead some ancient copyist, who preferred the second interpretation to the first one, with the consequences that we all know. It may have happened in the Middle Ages, when the vowel signs were used less and less, so that malum indifferently indicated both “apple” and “evil”. Another hypothesis is that when, again in the Latin version, the snake says: “Eritis sicut Deus, scientes bonum et malum” (“You will be like God, knowing both good and evil”), the word malum for some reason moved back four lines and found itself in the hands of Eve in the form of an apple.»5

And how much this error pleased Christianity, which with antelitteram marketing hype fought the world view of pre-Christian religions. Not only did the Greeks link the fruit to discord and sex, but the Celts made it the fruit par excellence of their paradise, Avalon, and the basis of their sacred drink, cider.
At the end of the fourth century the contrast broke out between the Roman Church, born from the fusion between Christianity and the Dionysian populations based on wine, and the Celtic one, with its cider-loving peoples. Between hatred and contrasts, the Celtic monks considered the utensils used by the Roman clergymen infected, and refused to eat and pray together, while the Roman Church defined their rites heretical.
Thus, with its dark evil, the apple transforms itself from a vehicle of divine knowledge into an infernal one, from a medium to reach the wisdom of abal, the sun, to a symbol of vulgar lust and charm (and even of venereal diseases), from Merlin’s positive magic medium to a negative one. And like everything, when it becomes diabolical it somehow becomes fascinating.

«Identification was easy, the apple had all the necessary properties to lay itself open. “So the apple’s initial sweetness was a sign of seductive intent, while the tart aftertaste indicated diabolic influence, because bitter flavours indicate poison, and all poisons were thought by medieval scholars to be the work of the Devil (…) The monk sliced two thin wedges from the apple and handed them to George and myself. “See how the skin is red like a woman’s lips?” he said. And the flesh, how white it is, like teeth and skin. He told us to take a bite. Crisp and delicious. This, too, was considered an evil sign, because most fruits soften as they grow ripe. The apple, however, actually grows harder, an “unnatural” behaviour that alchemists like Vincent de Beauvais claimed was “a sign of great deviltry . . . and of an immoral, cruel and misleading nature. (…) He pulled out another apple and cut it in half, this time horizontally. “Do you see the star?” he asked. Sliced this way, the seeds that had looked like a vagina now explained them to the ignorant masses. The apple’s seductive colours, its two-faced flavour, its suggestively feminine core, and, above all, the hidden pentagram, were interpreted as signs that it was the fruit that had grown on the Tree of Forbidden Knowledge.» 6

“Adam was but human – this explains it all. He did not want the apple for the apple’s sake, he wanted it only because it was forbidden. The mistake was in not forbidding the serpent; then he would have eaten the serpent.”
(Mark Twain)