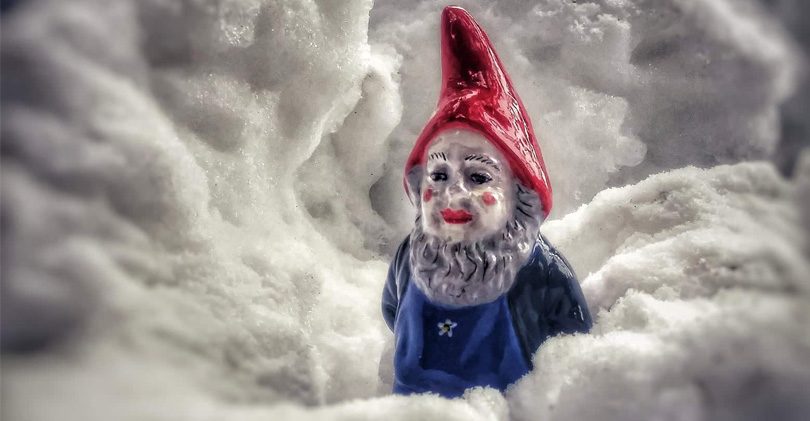 This is the story of Berta, a beautiful and capricious girl, of Hans and his talking cat, Peter, and of the mysterious Water of Life in the Source of the Dwarfs.

Once upon a time there was a village at the foot of the mountains whose Burgomaster was Berta’s father. The girl was beautiful and fickle and was admired by everyone, in particular by Hans, the son of the village miller. While working, he contemplated Berta and her beauty.
«It’s not for you, it’s not for you,» Peter, the talking cat, repeated. Hans would not listen to it because he was too fascinated by the splendour of Berta, who unfortunately was not really for him and did not consider him.

One day Peter the cat, while looking for mice, reached Berta’s window and discovered that she secretly observed Hans and the mill.
Seeing the cat, Berta reached out to caress him, sighing «Ah, you’re Hans’s cat! Say hello to him in my name!» Berta did not know that Peter was a talking cat which, startled, would not wait a minute to report Berta’s sighs to its master.

As soon as Hans learned all that and became more self-confident because of this allegedly requited love, he flung himself to Berta in his best clothes. Alas, Berta’s reaction was not exactly the one Hans had expected.
«What do you want from me, miserable miller? I have refused the best matches in the village and I certainly cannot go and live in an old mill.»
Hans was speechless and even Peter the cat was dumbfounded by the annoyed reaction of Berta, who added:
«Let’s see if you have courage! If you really love me, you must bring me the water of the Source of the Dwarfs, the Water of Life. The one that gushes up there on top of the rocks!»

Hans jumped in fear: it was said that the King of the Dwarfs would kill anyone, who dared to steal even a single drop of that magical water from his people.
The King of the Dwarfs was also the absolute lord of the mountains. At his command, avalanches fell, and at his request, stones turned into sapphires and emeralds. At his orders any source appeared or disappeared.
Hans would never steal from such a dangerous king, but love is like that, heroic, unconscious and brave.

So he decided to summon up all the courage he had in his body and set off in search of the Source of the Dwarfs.
At each step rocks and avalanches fell and a huge crow approached him croaking: «Go back or you will die».
But Hans continued fearless.
And then there it was, the magical source, gold of the Dwarfs with  its crystal clear and bright water.
Hans took the jug,
reached out his hand,
held his breath and …
realized that it was not water. It was crystal!
Persevering he took a stone and threw it on the surface announcing: «It is not for life, but for death that I am taking this water, because love will be my death».

At these words, the crystal lake disappeared and was replaced by a myriad of small edelweisses.
Hans picked up some of them in a hurry, while the horde of dwarfs rushed at him and shouted, «You stole our treasure, you will die!»
And they threw him off the cliff.

When the next morning Hans woke up on the rocks, Peter the cat was puzzled because the beautiful Edelweiss, the flower that Hans had managed to hold in his hands when he was falling, was truly the flower of life and death, and had pardoned him.

And Berta?
Hans was done with her: he married another woman who was simpler and less capricious.

It is in the Ladin valleys that this fairy tale about the edelweiss (Leontopodium alpinum) is told, perhaps inspired by the heroism of its living and flourishing between inaccessible and steep peaks.
Be careful if you think of stealing an edelweiss in the mountains. You might come across the King of Dwarfs and his army being furious about your theft.