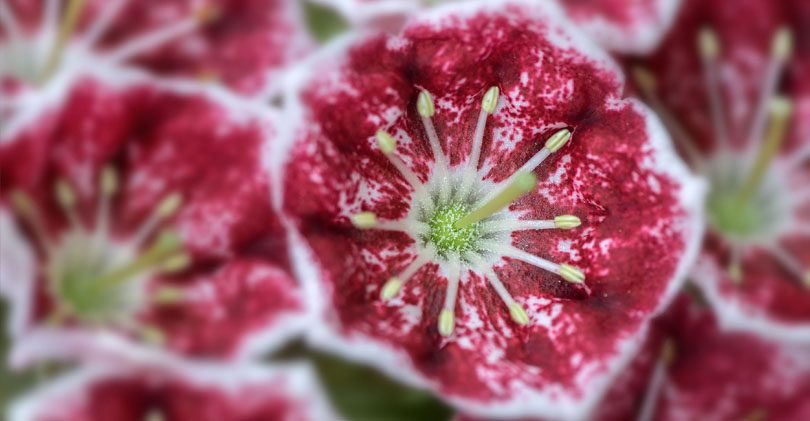 It is beautiful, sporty and “hunter”.
Its name is Kalmia latifolia and it is native to the eastern United States.
But how does the beautiful Kalmia spend its time?
Throwing the pollen in the air, by means of a series of ten filaments residing in its flowers and acting as catapults (see video in the reference article).

According to Callin Switzer, one of the authors of the research, the filaments are under tension, but when an insect approaches them, they spring and throw the pollen in all directions, also on the insect itself which then acts as pollinator and transports the pollen on another flower.
Another theory, which Switzer did not support, suggests that the pollen is thrown into the air and carried by the wind on other plants.

The analysis was divided into four different phases.
During the first one, the scientists tried to understand the biomechanics of the catapults, quantifying their speed when they shoot the pollen.
In the second phase they recreated a heat map to accurately understand the direction of the launch.
During the third phase they examined pollinating insects that visited the flowers.
Finally in the fourth and last phase, they tried to understand whether the plant has a real self-pollination capacity, i.e. does not need any insects.

The catapults throw the pollen at a speed of almost 13 km/h. The pollen is launched towards the centre of the flower and, for this reason, according to Switzer, the catapults could be triggered only by larger insects, such as bumblebees.
When the researchers prevented the pollinating insects from visiting the plant, they found that the flowers could not produce seeds. A sign that the chances of self-pollination are very low.