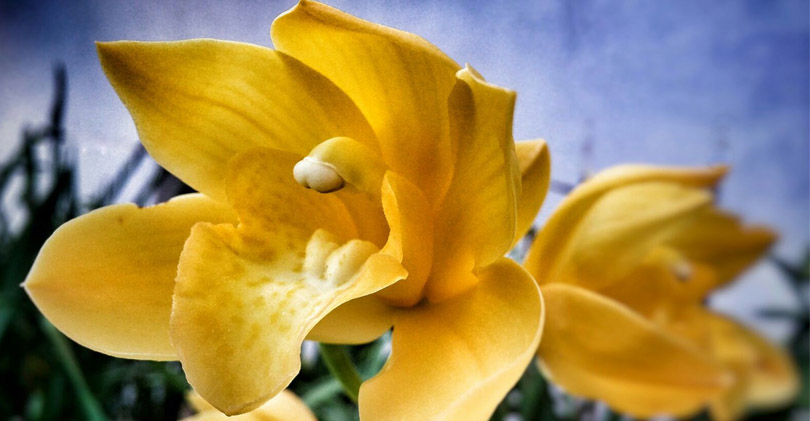 “Underneath their exotic surfaces, all orchid flowers are designed to encourage mobile animals to make physical contact, wriggle in, pick up pollen”
(Richard Mabey)

Without embedding plant life in purely anthropocentric schemes and visions, after discoveries such as those of Stefano Mancuso on plant intelligence, we can now take it for granted that plants apply different and more or less “honest” techniques towards the habitat where they live.
If the virtuous bean repays its pollinators with sugary substances requiring an effort from the plant, so many orchids are famous for coming up with real tricks.
As a matter of fact, some copy the females of the species of their own pollinators, thus becoming clever sex bombs.

One of the most famous and most frequently cited is Ophrys apifera: its flowers copy the female of the pollinator so well (shape, texture of the tissues, hair on the surface, “perfumes” and pheromones) that the male often prefers the flower to the available female in heat.
While the male is dealing with the dummy mating … tac, a snap mechanism literally glues the pollen on it, which will be carried around for hours, or even days, through all the neighbourhood.
This is the general behaviour of all Ophrys.

Drakaea, the hammer orchid, has a privileged relationship with the Thynnidae wasps: here too, the bait is the copy of the female of the species. Unlike the Ophrys, however, when the male lands on it, attracted by the fake female, it is trapped and literally beaten several times at the other end of the flower, where pollen is obviously to be found.

It seems that a third of orchids use fraudulent or aggressive cooperative techniques to secure a future.

The Mexican bucket orchids produce substances used by the male of their specialized pollinator – the euglossine bee – to attract the female of their own species with sexual scents. More than a collaborator, the male bee looks like a victim: the orchid, in fact, uses real “traps”. Attracted by scented waxes, a real sexual attraction, the pollinator leans against the edge of the orchid; from here it slips, in a sharp fall, into the bucket filled with a colourless liquid. The escape route is a tiny tunnel of its size, which represents an obligatory passageway. To reach it, it uses a “stepping stone”1. However, as soon as it enters, the bottleneck narrows and immobilizes it: at that moment the orchid glues the pollen on it through the jaws and does not leave it free until the glue dries. Covered in pollen, it can go in search of other fragrant destinations and voilà, another bucket orchid is waiting for it, this time to steal the pollen it is carrying. More than the path of a collaborator, it seems to be a real ordeal.

Brassia or spider orchid chose a particular pollinator: a solitary – pompilid – wasp that lays its eggs on a spider. On hatching, the larvae feed on the live arachnid and in order to do so, in true Alien style, they preventively inject it with an immobilizing poison.
As they resemble the poor unfortunate, spider orchids thus attract the wasp with appealing promises that, when the poison is activated, is impregnated with pollen.

Bulbophyllum nocturnum blooms at night and attracts night flies, leaving tentacles hang down, which have a consistency (probably also a smell) similar to that of the mushrooms in the area, which the flies feed on.

Paphiopedilum sanderianum resembles a shoe, and belongs to the group of the slipper orchids together with the beautiful Venus’ shoe, the Cypripedium calceolus.
It has long petals – up to one and a half metres – working as bait for pollinating insects.

Catasetum denticulatum does not even try to offer a bait with nectar: when a bee lands on it, it launches a tiny arrow of pollen from above, which sticks to it with a special quick-drying glue.

Their seeds are invisible, like stardust, like whispered magic. Some weigh a ten millionth of a gram, certainly to be transported, but perhaps also not to be perceived. In order to keep them viable, the seedlings, in the first years of their life, live like parasites exploiting certain mushrooms.

Not all orchids are the same

Let’s be intellectually honest, not all orchids do that.
They developed unique and unrepeatable relationships with their pollinating insects, in a system of coevolution that has fascinated science for a long time.
You want an example? The comet orchid from Madagascar (> Sensitive nature and Darwin’s orchids).
With a disproportionate nectary, it highlighted the genius of Darwin, who figured out the existence of a pollinator insect never seen before, specific to the flower:
“But in Madagascar there must be moths with proboscides capable of extension to a length of between ten and eleven inches! This belief of mine has been ridiculed by some entomologists.”2

We are irresistibly attracted to those who
will create the problems that we need
for our personal evolution.
(Alejandro Jodorowsky)

Notes
1 page 72, from “The Cabaret of Plants: Forty Thousand Years of Plant Life and the Human Imagination”
2 position 632, from “An Orchard Invisible: A Natural History of Seeds”