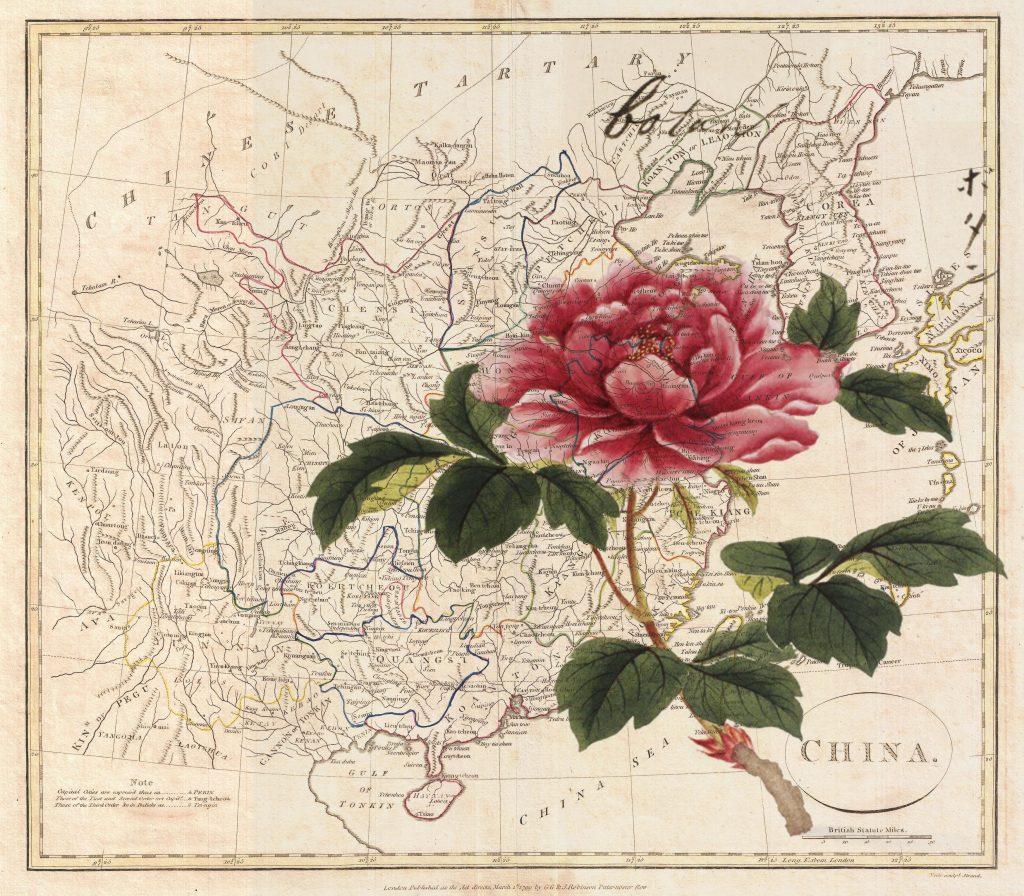 This is the story of a long journey through time and space.
Boats in stormy seas, gardenlovers of old times, a flower repeatedly stolen from China’s remote districts.
Shanghai and Canton.
Seven peonies sailing the seas, a legendary blue one with thousand petals and the mountain of wild peonies.

This is the story of the Peony moutan and how it, and not only it, arrived in Europe …

It was the T’ang dynasty, and the Queen of flowers, also called One hundred ounces of gold (this was its price originally) lived in the gardens of the Emperor of China, adored and considered so beautiful.
Legend has it that in the gardens of the Mandarins, specimens of extraordinary greatness grew and flourished.
There was one, near Shanghai, which kept on flourishing, producing up to four hundred flowers a year. The owner was so in love with it that he had a tent built to protect it from the sun. In front of it, he had arranged a seat for him and for all the visitors who wanted to contemplate it.
“”Every day, for many hours, the old mandarin sat there and while pipes and teas followed one another, he caressed his favourite Moutan wha with his eyes”.

Its fame had even reached Europe: it was known, without ever having seen it, from tales and stories of missionaries and drawings of Chinese art.
Nobody, if not the returning traveller, had ever really seen it. At least twice the size of a rose, the peony was one of the legends coming from the Far East.
So it was that Sir Joseph Banks, a travelling companion of James Cook in the first great expedition to Tahiti and introducer of plants such as eucalyptus, acacia and mimosa, stole it from Canton. The route, however, was too long, tiring and dangerous, and his only rare specimen died during the journey.

A Dr Duncan from the East India Company attempted the venture again.
From China to England the beautiful peony survived, but it arrived so exhausted that it did not last long in Kew Gardens. It was 1789, the year of the French Revolution.
Five years passed and the Triton ship entered the port of London with seven surviving moutan peonies: one for the king, two for Sir Joseph and four for another man. Unexpectedly the dangers of the journey were not yet finished: the ship was dismasted in the Channel. Two plants did not make it, but finally five peonies arrived in England, rooting for the first time, at the beginning of 1800, in old Europe.

The beautiful peony also spread in France: the French gardeners created their own market, while in Paris a Monsieur Noisette sold them at the initial price of 1500 francs up to 100 gold Louis. Shortly after, France started suffering from peonymania.
In truth the species were still few and often the success of some attempt of English hybridization looked more like a stroke of luck than a skilful result.

One day in 1834, Robert Fortune, a grumpy collector for Horticultural Society, was given a strange list in which, among other missions – such as finding tea plants and examining the peach trees in the private garden of the Emperor – he was asked to try and transport the legendary blue peony back home, whether or not it really existed.
Fortune set off and, in his wanderings, he realized that each area had its own varieties: those coming from Canton were not the same as Shanghai’s and vice versa. He then came across a small nursery that first showed him their precious “yellow” peony, with the white flower and the centre tinged with yellow, a wisteria-coloured mallow and finally one which was very dark black and brown.
Fortune understood. Here in front of his eyes was the famous blue, thousand-petalled peony, which was told to flourish only in the Emperor’s garden.

Over the years, facing many difficulties such as the pirates on the Blue River and the dangerous storms of the Yellow River, Fortune collected between 30 and 40 varieties of peonies; almost all reached safely the homeland.

Several plant hunters looked for others in the farthest corners of the world, such as Japan, Siberia or Eastern Tibet, but it was not easy to get them to their destination, nor to root them in the hunters’ motherland. The Jesuit father Jean Marie Delavayi, for example, sent seeds from China and Yunnan to the Natural History Museum in Paris: they flourished 12 and 11 years later, respectively.

At the beginning of the century the breeders could begin to broaden the range, crossing our beautiful moutan with for example the lutea.

One last dream to follow: the wild ones.
Until the early 1900s, the only P. suffruticosa (Peonia moutan) cultivated were Oriental horticultural hybrids.
The true wild progenitors were never found, not even on the Mou-tan Shan hill, the mythical mountain of peonies where, according to tradition, so many should have been found.
Finally in 1910, William Purdom came upon one: red, beautiful, dark, finally wild, on the slopes of Min Shan, in southern Kansu .
We can only imagine the sense of conquest of a man in search of a peony hidden in its large spontaneous habitat.

Centuries passed, stormy seas were sailed, immense lands were crossed, difficulties and obstacles were faced, everything to give a rare beauty to a garden.