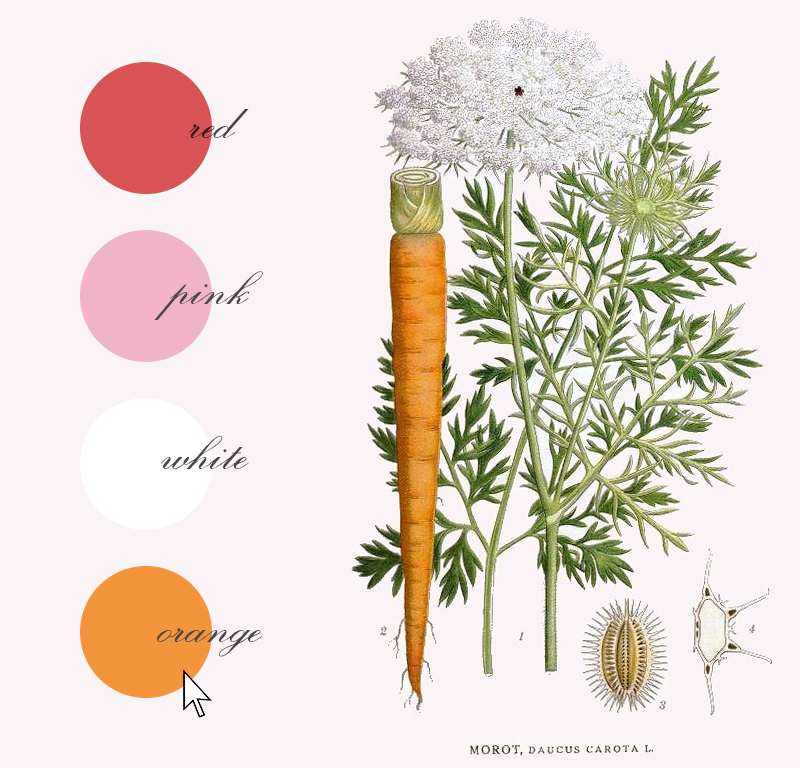 “Human design has made nature hypernatural. Hypernature is an exaggerated simulation of a nature that never existed. It’s better than the real thing: a little bit prettier, slicker and safer than the old kind. Hypernature is culture in disguise.”*
(Nextnature)

We have a secret to reveal on the carrot: the carrot colour never existed in nature. It is a “modern invention”.
Earlier there were many other colours, but not orange!

At the beginning: white, red and yellow carrots

The story of the carrot is full of mysteries, as we have not yet been able to understand when it was domesticated.
Thanks to Nikolaj Ivanovic Vavilov (do you remember the Russian geneticist and his seed database? > Sensitive nature and the thousand-year-old seeds) and to his travels around – in the true sense of the word – the world, some spontaneous carrots were rediscovered in Afghanistan and Kashmir: different from our carrot-coloured darling, they were purple, pink and yellow.
Thanks to his work, and to numerous subsequent studies, it is clear that the carrot was first grown in Afghanistan, especially the red one, in the Himalayas and in the surrounding areas.
According to Ibn al-Awwan, agronomist author of the thirteenth century, in the sixth century BC in Palestine two varieties were known: a red, tasty and thin, and a yellow one. They were eaten with vinegar, in brine, with other vegetables or seeds, sometimes kneaded with bread.

In the Roman world, however, these two varieties are not mentioned, so much so that the great cook Apicius, and not only he, speaks of a white carrot par excellence, to be fried or prepared in salad, and does not cite any other colours.

How come they do not appear in Roman texts?
What is certain is that, in case the coloured carrots were already known in Rome, it was the white one to be favourite and privileged.
White as the parsnip (a large white root similar to the carrot, but which does not taste like carrots), the two remained a bit like twins, often confused and replaceable, approximately until the sixteenth century.

Probably travelling as nomads and with nomads along both directions of the Silk Road, the lively Afghan carrots arrived in Spain, transported between the tenth and thirteenth centuries by the eastern caravans through North Africa. But not only that! Probably passing from central Europe or from the Slavic speaking countries.
After which the great travellers left for the east: from Iran to China in the thirteenth century and then again for Japan in the seventeenth.
The carrot is mentioned in the thirteenth century by the Italian Pietro de’ Crescenzi, when he tells that it is sold in bunches on the Italian markets. In the same way it arrived in Germany, the Netherlands and later in the UK, while in France the red ones were not very popular because they “dirtied the broth”.
In the seventeenth century carrots invaded part of the world, making it a bit white, a bit red and a bit yellow.

And when does the carrot colour appear?

Why in the eighteenth century were carrots mostly orange? What happened?
Apparently the carrot-coloured carrot was the result of the work of Dutch hybridizers who made it “orange” to celebrate William of Orange.

Everybody liked the orange carrot, which had a great success and began to be represented in still lives and paintings (to tell the truth, according to Bloch-Dano, the first evidence of the appearance of an orange carrot is in a work of 1618, “Vegetable Vendor at the Utrecht Market” by Witteval). In 1721, late with respect to painting, the agronomists finally mention the Long Orange Dutch carrot, the forerunner of the orange-orange Horn carrot, today so abundant and whose name derives perhaps from the town of Hoorn, in the Netherlands, where it was “invented”.

There are still many mysteries about the history of the carrot’s travels.
A story not necessarily all orange.

*“Human design has made nature hypernatural. Hypernature is an exaggerated simulation of a nature that never existed. It’s better than the real thing: a little bit prettier, slicker and safer than the old kind. Hypernature is culture in disguise.”