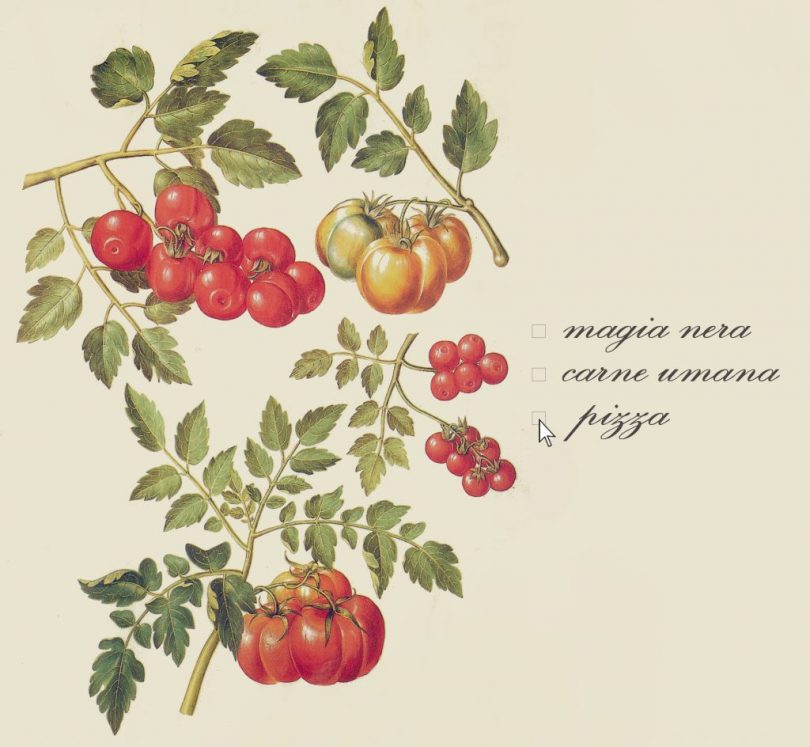 In 1965 Rita Pavone sang “Viva la Pappa col pomodoro” (Long live the tomato soup), Pablo Neruda dedicated an ode to it, Andy Warhol consecrated it as an icon with the Campbell Soup Can.
We are totally suffering from tomatomania!

The history of tomato has not always been so idyllic.
Born spontaneously in the Andes, in Peru and in Chile, it was like a small cherry, and grew in bunches. It was not particularly charming, nor did it seem particularly succulent and
as if that was not enough, it was highly toxic. In humans it caused all sorts of disease: from nausea to hallucinations, to paralysis.

It was thanks to the Aztecs that the wild tomato turned into Tomatl.
How did that transformation happen? Over the centuries and thanks to their foresight. They discovered it as a pest in the corn fields and changed it in the ancestor of our tomato, selecting the less toxic plants.

Using it as a sort of ante litteram “sauce”, they dressed a series of typical dishes and meat, often human …
“In fact, Bernal Diaz, a soldier-reporter of the Conquest, tells us that the Aztecs “ate arms and legs of the victims with the chimole sauce”, made of peppers, tomatoes, wild onions and salt”.

Thanks to Cortés, it arrived in Europe.
Although today it is the darling of traditional Italian cuisine, at first it was not welcomed with standing ovations or by Neapolitans with pizza dough ready to be dipped in red … On the contrary!
It suffered the fate of many plants unknown at that time, in an era affected by “neophobia”1, i.e. the great distrust combined with curiosity, to the news, especially the edible ones, coming from new territories appearing in the maps.

Our beautiful tomato was in fact guilty of the “crime of appearance”: it looked like its relative, the mandrake. A relative with a bad reputation. Black magic. Smell of death and sulphur. Yellow-orange berries that come off when they ripen and, there we go!, when the plant is completely ripe, it disappears”

And indeed it belongs to the Solanaceous family! Like tobacco and potatoes, object of the same mistrust. A very dangerous family, which includes some of the most poisonous plants, such as Belladonna, Datura, Henbane …
At the beginning, it was introduced in our culture very quietly and was mainly used as an ornamental plant and anti-mosquitoes.

And let it be tomato!

The tomato arrived in Italy from Seville.
Then it happened that the humanist doctor Pietro Andrea Mattioli spoke of it as a fruit that turned golden yellow – from which pomo d’oro (golden apple) and then pomodoro (tomato) – and could be eaten fried, salted and with pepper.
At the beginning of the seventeenth century, the most fearless ones even ate it in salads!

Here we are: the tomato enters slowly into the kitchen, first the Spanish and then the Italian one.
It is said that in the Neapolitan cuisine it appeared in 1692, with the oldest recipe, precisely “the Spanish tomato sauce”.

Ennobled in the Italian cuisine, it was the turn of the sauce, first to be used with meat, then with pasta.
Linnaeus included it in his classification fever in 1750: Solanum lycopersicum or wolf peach, definitely edible.
Pizza arrived later, in the nineteenth century.

In France it arrived in the baskets of two chefs from Marseilles, who transported it from the south and made it famous in their restaurants Les trois frères provençaux and Le bœuf à la mode.

In America it landed, or rather returned, in the nineteenth century, against all expectations, not from Mexico.
It travelled in a suitcase, precisely in the suitcase of President Thomas Jefferson returning from a stay in France. Jefferson cultivated it in his garden and in 1806 proposed it on the table or rather, at a presidential dinner, which is quite more impressive.
It then spread in the rest of America in the nineteenth century, from Louisiana, this time in the pockets of settlers who moved from the south to the north and brought it in the form of seeds.
And on this trip the ketchup was invented: it is a recipe of the Louisiana of that time, absolutely not of our time.

It is only at the beginning of the twentieth century, with the birth and development of the railway, that tomatoes are tossed here and there. Winning the first prize of kitchen king in America.

From fruit to vegetable

The name itself (pomo d’oro -golden apple- is indeed the translation of malum aureum, or all round fruits) defines it as fruit. How could it become a vegetable?
It happened right during its return to America. At that time, the chaotic port of New York imposed a 10% tax on all vegetables from the West Indies. In the conflict between importers and traders, the Supreme Court judge ruled: from a botanical point of view it may be a fruit, but do you eat it as a vegetable? Yes, so there are no doubts. It’s a vegetable.

From the Aztecs to the Italians. From human flesh to pizza. From fruit to vegetables.
Who knows what other surprises will our round tomato reserve?