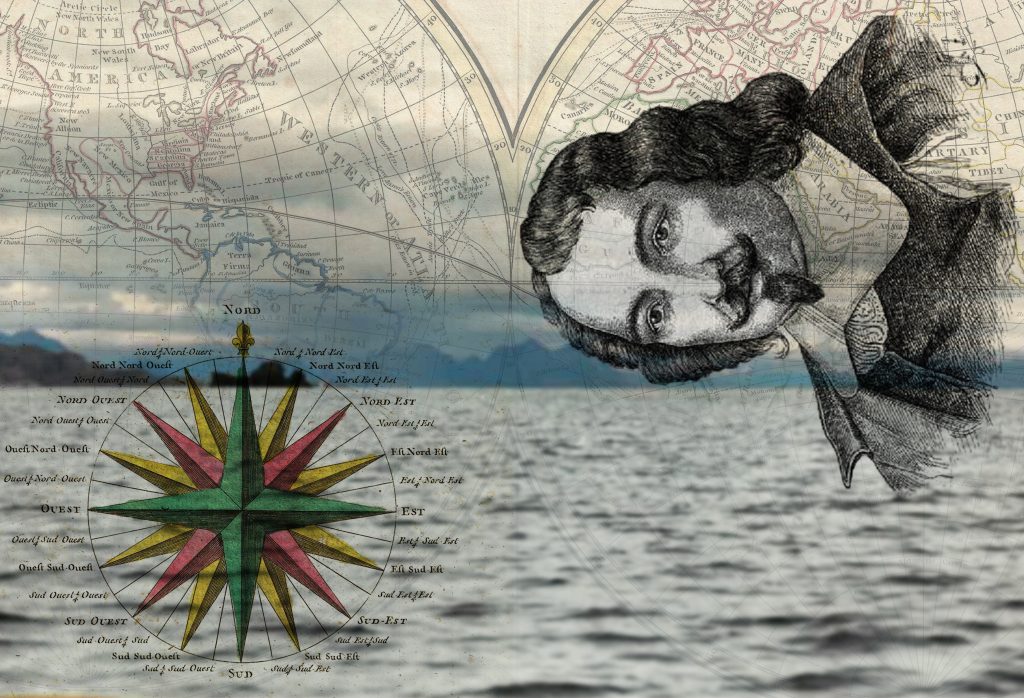 In March 1603, during a month of beautiful blooms in years of great discoveries, Samuel de Champlain boards the Bonne – Renommé from Honfleur, in Normandy, as a passenger. After two months and 11 days he sets foot in America, disembarking at Tadoussac, near the current Quebec.
Samuel de Champlain had left to found a settlement in Canada, joining the fur trade.

He meets the Algonquins, the native American tribes divided into clans and tribes, among which the most famous are the Powhatan, the Pocahontas tribe, and attends a party where naked women dance and men run races. In his 21 trips to New France he meets the Iroquois, also called the Long House People.

All that he sees, feels and discovers is written in a short report:”De sauvages”.
Among Champlain’s discoveries there is also a strange root, which does not have a name yet and seems to taste of artichoke:
“(…) the best lands I’ve ever seen. So many woods, but few pines and cypresses; there is a large quantity of vines, pears, pits, cherries, red and green grapes and certain small roots the size of a walnut, (…) very good if roasted or boiled”

What will this unknown root ever be?

To Europe, however, it will be brought by the lawyer Marc Lescarbot.
The Indians call it with the beautiful name chiquiebi, Lescarbot would like to call it “Canada” – with obvious dedicatory intentions – but it obtains the most varied titles and names like “nut of earth” or “Canada artichoke”, Jerusalem artichoke, …

It is not clear where it comes from and where it should be set at the botanical level.
Some identify it with a Helianthus, others with Chrysanthemum.
But it turns out that the root has a specific quality: it reproduces in the blink of an eye!
This is how it is going to conquers Europe: travelling to Holland and Germany, being grown in the gardens of Cardinal Farnese in Rome.
No one knows where it comes from or how to call it, but it is very much liked.

But then, in France, a delegation of Brazilian natives appears: feathered, anthropophagi and cannibals, they are here to perform for the young Louis XIII.
Much more sensible than you’d expect – so much so that Montaigne wonders if they are really the barbarians or we are, in some specific conditions such as the religious wars, with an unpronounceable name, tupinamba, they are the ones who inspire a name for the Canadian chiquebi: et voila! Let it be topinambour (in Italian topinambur)!
And so the Indian roots become Brazilian. A child’s play.

The golden moment of the unusual root begins. It even reaches the kings’ table.
Unfortunately this splendour soon ends.
Already in the seventeenth century the natives become savages, with rather negative nuances. With them also the topinambur goes from riches to rags, and is now relegated (we are at the end of the seventeenth century) to the diet of the poor.
It becomes the food to eat when in penance, while in some areas of Normandy it is used as feed for pigs.
Darkness falls around the topinambur.

Victory over the potato, the vintage and the biofuel

It is rediscovered in the Second World War, together with the rutabaga: “the Laurels and Hardys of the occupation”.
It survives the cold, the poor conditions of transport, replaces the potato in the diet of the population … What a victory!
Too bad that at the end of the war they say goodbye to it with a “thank you very much, but I do not want to see you for a long, long, long time”
And the darkness falls again on the topinambur

Everything seems lost  … But no!
Now it is back in vogue, with all its vintage gold. It is part of the brotherhood of the forgotten vegetables.
Perhaps, however, the future of the topinambur, “the root with the ace up its sleeve”, is in a completely different sector: as was already the case in 1943 when it was a substitute for petrol, it can be used as a biofuel. In Brazil, its adopted homeland, it is already used for this purpose.

P.S. Do you know which plant grows from the topinambur? Heliantus tuberosus, or the sunflower of Canada.