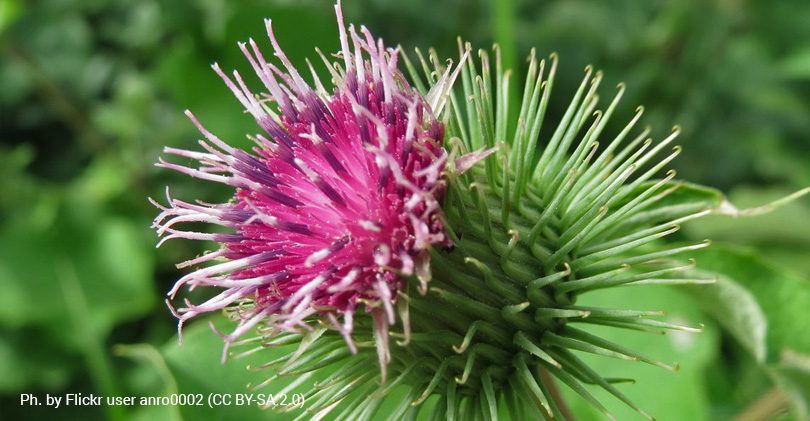 Infesting adj. [present participle of the verb to infest]. – something that infests, causes infestation: a pest. In botany, infesting herb (or weed), a plant of no agricultural value (for example, barnyard millet, darnel, red weed, bindweed) that spreads in the cultivated fields damaging the useful plants, to which it subtracts the nourishing salts of the ground, water, space and light; in some cases, it takes over by suffocating the cultivated species.
(Treccani)

They damage, destroy and devastate our perfect garden idea: it’s always them, the weeds.
Being a weed is a difficult job: one must be ambitious, constant and stubborn (> Travelling into a landscape among the weeds in Consonno).
And at some point, unexpectedly, one must also be beautiful!

The burdock
or the first beauty among the ugly ones

The first – and the favourite – to which an aesthetic dignity has been recognized is the burdock.

Respectability and space are first given by the seventeenth-century Dutch painting, with Jan Wynants and Jacob van Ruisdael.
Then we find it again, like a real princess, in many works1 by the French Claude Lorrain, master of the ideal landscape. In his painting the burdock is the only one to be realistically painted and made recognisable, unlike all the other flowers which are instead represented as ideal prototypes and more similar to the floral decorations of the Books of the hours of the medieval period than to reality.

Then around the 1940s, Thomas Gainsborough designed it with a sculptural structure:
“What the burdock suggests in these works is that beauty can also reside in the uneven and the asymmetrical – in the idea of weediness, in fact”.2
We are at the threshold of the 1800’s and by now the burdock is present in the works of authors such as Joseph Wright, Richard Wilson, J. M. W. Turner, John Linnell, James Ward, John Constable and Edwin Lanseer. But its real supporter is George Stubbs.
In a Lion Devouring a Horse, three elements are represented: the lion, the horse and the burdock. Nothing else.
“Stubbs seems to be suggesting that even a weed suffers and ages like any other living thing.
It is a rather an unusual perspective on botanical beauty, that it might take the form of elegance, what you might call “grace”.3

Burdock conquers space not only in figurative art: John Ruskin mentions it in his work Proserpian – Studies of Wayside Flowers, which is a more or less successful attempt of inventing a new taxonomy, as an alternative to that of Linnaeus, based on very different principles.
Ruskin is one of the founders of the Arts and Crafts movement together with Morris, a precursor of the Art nouveau and the father of romantic restoration: in line with his revolutionary thinking applied transversally to very different arts, the new taxonomy is based on aesthetic and not scientific principles.
Starting from these assumptions, according to Ruskin the very structure of burdock developed to be beautiful: “So, if you please, we will take a leaf of burdock, the principal business of that plant being clearly to grow leaves wherewith to adorn fore-grounds”.4

In other respects Ruskin’s thinking is deeply rooted in outdated beliefs. Beauty is indeed a human prerogative and an indication of divinity. The human eye is thus the only judge.
Furthermore it is not enough that a weed is beautiful to forgive its behaviour.
Beauty becomes secondary if the plant tends to be a spoilsport: “it is its being impertinent – thrusting itself where it has no business, and hinders other people’s business—that makes a weed of it”5.

In art, in poetry and then in gardens. Do weeds really play a full role in our gardens?

In the Victorian garden the exotic plants, coming from the distant borders of the empire, are grown and protected in heated greenhouses and then transplanted into neat rows of flowers with bizarre colours, called carpet bedding.6 Between one flower and another, weeds are absolutely not welcome.
These plants are often ugly beasts, if their propagation is not controlled.
In any case, every plant in the carpet is uprooted at the end of the cycle, so as not to leave the garden in a mess.

After working as a gardener for a while, upset by the Victorian ugly ways towards plants and inspired by the Arts and Crafts movement garden, William Robinson (> Travelling into a landscape and the bad-tempered William Robinson) published The Wild Garden: the result of his exploration experiences, this text is based on a new vision of gardening, on how spontaneously plants are born in nature.
The goal is to create a wild flower garden with local plants.
“The list includes numerous species of weeds: celandines near streams or in the wet corners of a meadow; poppies and Adonis flowers in the shadow of the walls or on the stony banks; cockles, wild mallow, St. John’s wort and willowherb scattered here and there in the flower beds.”7

And not just that: the gardener proposes to naturalise many exotic plants next to the native ones. He knows very well that they can be ugly beasts, but beyond danger he considers them beautiful.
It is the Irish gardener who first suggested that “the wild beauty of weeds”8 could find a place in our “outdoor rooms”9.
Together with Gertrude Jekyll he created the much loved Cottage Garden style.

Velcro
or how the weeds taught us to stick

Burdock also inspired the invention of Velcro in the 1950s.
The history of Velcro begins with George de Mestral, a Swiss inventor particularly interested in closures.
Going hunting with his beautiful dog, he noted with disappointment with how much strength and stubbornness the husks of the burdock adhered to the animal’s fur: frustrated by the difficulty in removing them, he understood that their shape was necessary to optimize the hooking to the hair of the animals, but if they were flat they could adhere to a rough area from any angle.
After the Second World War, the invention and its applications continue, but with one complication: the high costs of the material, nylon.
Only in the 40s does our hero manage to get enough material for experimentation.
Finally in 1951 Velcro is patented.

The key point of the invention lies in the fact that in front of difficulties nature responds in an irregular, imprecise and functional way.
It is enough that the husks of the burdock find enough hooks, even if they are not perfectly aligned.

Notes
1 in works such as Landscape with Dancing Figures the burdock covering the rocks is evident, in Landscape with Rustic Dance, Landscape with Narcissus and Echo, Landscape with David and the Three Heroes.
2 and 3 “Elogio alle erbacce” by Richard Mabey (Ponte alle Grazie, 2011)
4 “It is a style of gardening with mainly, but not exclusively, foliage plants to create intricate designs giving a tapestry or carpet effect.” https://plewsgardendesign.co.uk/ >