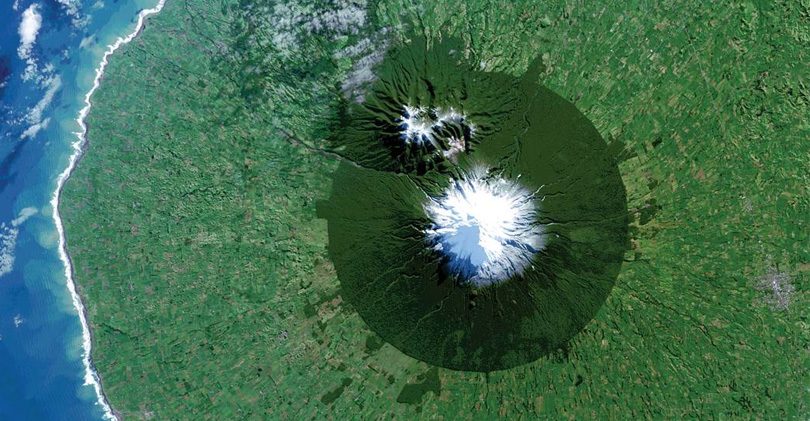 Seen from space, the Egmont National Park in New Zealand shows the benefits and limitations of  the protected areas: the protected and isolated forest area (dark green) is surrounded by once- wooded pastures (light green and brown).
Ph. by Nasa. Editor: Steve Fox

“Humans are conducting a large-scale geophysical experiment, which would have been impossible in the past and will not be reproducible in the future. In just a few centuries we are going to return to the atmosphere and the oceans the concentrated organic carbon dioxide that had been accumulating in the sedimentary rocks of the planet for hundreds of millions of years”.
(Revelle and Suess)

We are apparently in a new moment in the history of the Earth and of our own species: we have now reached the Anthropocene.
Perhaps, as is always the case when living through a process of change, not all of us are fully aware of it, but if we think about it …  something unique, perhaps irreversible happened: men with their actions and interactions are changing the course of Nature, to such a point where the conceptual status of “nature” changes.

What is Anthropocene and when was it born?

In “Vita Activa. The human condition”, the American naturalized German philosopher Hannah Arendt, wrote about the launch of Sputnik and defined the Soviet conquest of space not enthusiastically, but rather as the end point of an era. Humans were going to abandon the place that, by reason of unforeseeable circumstances, had been “given” to them: the Earth. Thus, the necessity of conquering other territories, outside our primitive one, was the beginning of a new chapter of humanity marked by the sense of “alienation of the Earth”.

This concept expressed by Arendt is the conceptual basis of the Anthropocene, that is a new historical moment of conquest of the space and modification of the planet to our convenience.
The term, which can be defined with regard both to the natural sciences and to the social and human ones, appeared for the first time in the ’80s, coined by the biologist Eugene F. Stoermer. Later it was used in a famous article by John Vitousek where, speaking of the impact of human beings on the Earth, he openly declared that the planet was now dominated by them.
Finally, it got through into the intellectual world when the Nobel Prize winner for chemistry, Paul Crutzen, during a conference of the International Geosphere – 2000 Biosphere Programme, declared loudly “No! We are no longer in Holocene, we are in Anthropocene!”
Two years later, in the magazine Nature, together with Stoermer, he gave shape to the idea that our geological era had changed.

“A new era in the natural history of our planet, characterised by an improvement in the quantity and quality of the impact of the human species on Earth, considered as a whole system”.

For Geology:
a new moment in the history of the planet, to be added to the time scale that we all studied and which is divided into eons, eras, periods, epochs and ages. Holocene saw Homo sapiens coming to life, now Homo petroleum will follow him.
It would therefore be a “geological revolution originating from human beings”: for the first time in the history of the human beings and also of the planet, a living being was able to modify the laws of the Earth that have always been considered immutable.
From this point of view, Anthropocene remains just a proposal, because in Geology evidences and proofs are represented by the rock layers of the earth’s crust.  We shall have to wait several years for these to be considered as conclusive.

For climatology, ecology, geochemistry, chemistry, oceanography, or sciences that study the Earth as a system, from the core to the atmosphere, crossed by a continuous flow of energy and matter:
a rapid and global change, as never before, of the equilibrium of the Earth system, triggered by our species.
Evidence is so clear: the sea level rises, the large-scale displacements of various sediments, the faster and greater rates of the species extinction. We have triggered an irreversible process that is leading to a structural change in how the planet functions.

The social and human sciences

For the social and human sciences:
the moment when human beings rediscover themselves as “a geophysical force, what we might call a telluric force. Humanity can change the functioning of the Earth just like the volcanic eruptions, the movements of the continents, the cycles of solar activity or the orbital movements of the planet around the Sun”.
The concept of “nature” itself has automatically changed: it is no longer the inflexible and immutable background of human activities and evolution, but a whole of elements interacting with the history of mankind and the choices made by human beings.

Before
Human history has always been the place of will, intentionality, ethics and politics. Nature, the result of a historical and human construction, has always been conceived as something outside our species, a fact. Sometimes it was moved by the longing for something extra-human, for example in the religions of the Book, sometimes it was a blend of impersonal and involuntary forces, that is the Scientific Revolution.
Now
With Anthropocene, human intentionality ranks with equal merit with all those unintentional phenomena that in our mindset have, until now, been considered the only ones capable of contributing to the earthly mechanisms’ evolution. Now there is only one history, in which human and natural forces are combined.
In order to think of and create a connection with such a changed world, our way of thinking about nature must also change.

“Anthropocene is a cultural turning point. (…) in Anthropocene, history, geography and geology come together: humanities and natural sciences will be reunited after two centuries of separation”.

No biological adaptation, nor transmission of species was needed to be ready for this geophysical change and new human condition.

What happens now?
To be continued.