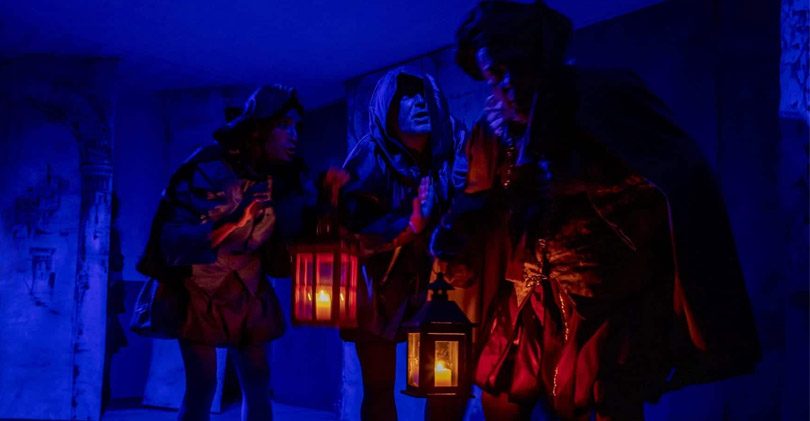 Ph.Gruppo fotografico Nesso. In the play “La Vite d’Arbola” by Ivan Bellini, loosely based on “La mandragola” by Niccolò Machiavelli

They feed, cure, poison, excite.
Sometimes for defence, other times to awaken, attract and gratify the senses.
They are the “plants of desire” that have been seducing those who want to seduce since the dawn of time.

Aphrodisiacs. Historically universal.
Evidences about the use of substances that influence sexuality are found in every people: fruits and vegetables, filters and potions in the spasmodic and millenary search to preserve and enhance man’s “vital energy”, to secure the graces of Aphrodite, Greek goddess of love, source of seduction and pleasure, sexuality and lust.

A long history of pleasure

The ancient seducers, drawing on the inexhaustible plant world, considered a food with vasodilatory properties as aphrodisiac, or a fruit or a vegetable shaped similar to male or female genital organs, or an ingredient surrounded by an aura of mysterious rarity, perfect for triggering imagination and autosuggestion, but often injurious to health.

Among the most famous and praised aphrodisiacs of all time, the sacred soma drink of the ancient Arii has been completely lost. The same fate suffered the plant from which it was distilled, which, in vain, numerous scholars have tried to identify.
The first written records on the use of aphrodisiacs can be found in the writings of the Sumerians, in the Egyptian papyrus and in the bone engravings of ancient Chinese oracles.

Egyptians
Fennel, pomegranate, water lily, blue water lily, mandrake … were among the most refined aphrodisiacs in ancient Egypt, while the most stimulating recipes were based on spicy flavours such as ginger, coriander wine and radishes mixed with honey. It is this ancient belief that defines “spicy” all that is related to Eros.

Onion was considered a real “bomb”, while foods with a vaguely phallic shape included lettuce, a plant sacred to the god of fertility Min.
In a papyrus dated 1700 years BC there is the oldest recipe for a plant aphrodisiac useful, as reported in the papyrus, “to rejuvenate the blood, to reinvigorate what has become weak”; there is also a list of different ingredients such as acacia and honey, the latter king of the “stimulating” preparations of all time.

The trafficking of aphrodisiac products and talismans was flourishing, while the most popular remedies arrived from the priestesses. Very curious is the prescription in which doctor Galen recommended pine nuts, while lentils were considered useful for the longevity of the sexual function.

Romans
The love filters, called Amatoria pocula, were a real social scourge due to their toxicity, sometimes lethal: they were prepared with mandrake and nux vomica, which contained strychnine, rather than with ingredients of animal or even human origin.
A widespread phenomenon, so as to assume the proportions of an emergency that led the emperor Vespasian to issue an exile decree for those who had been caught preparing or distributing such mixtures and sentencing to death if the potion had proved deadly.

Doctors preferred to recommend mild remedies such as rocket, which grew around the statues of Priapus, a divinity symbol of abundance and fertility, or cinnamon, rather than, like the Greeks, onions, pine nuts and oysters.

In his Ars amatoria, the poet Ovid also advised against dangerous love filters, suggesting to rely on herbs and medicinal plants and proposing natural recipes to reinvigorate the passion of love, with ingredients such as heather and honey.

Christianity
The advent of Christianity demonized many sacred plants of antiquity, curbing the moral degradation of Rome and trying to bring sexuality back into the generative and affective sphere of marriage.
The monastic communities secretly kept the knowledge of the ancients, but used it to dismiss temptations, imposing precise rules on nutrition: it was in fact asked to limit the consumption of red meat and onions.
To appease the instincts of noblewomen and churchmen,  the use of medicinal plants with sedative power was recommended, such as Agnocasto (Vitex agnus castus), also called “the pepper of the monks” because of its round and black seeds.

For the laity an important novelty came from the East: the spices offered a vast panorama of exciting substances, often accompanied by fantastic legends about their origin, such as cloves, nutmeg, cinnamon, ginger, saffron and coriander. So very expensive and highly sought after as to become a status symbol.

Renaissance
At this time, doctors became aware of the fact that the power of these remedies was largely psychological. The artistic testimony of this awareness is “La mandragola”, a famous theatrical comedy by Niccolò Machiavelli, which makes fun of gullible people: the fool Sir Nicia, desiring to have an heir from the young wife, agrees to be betrayed, following the deceptive prescriptions of the young Callimachus who, disguised as a doctor, recommends the mandrake root.

“According to a macabre superstition – explains the neuropsychiatrist Giuseppe Magnarapa – mandrake was a plant growing from the secretions released by the hanged men. In sorcerers’ recipe books there are often various ingredients linked to these men condemned to death. Even in Macbeth, witches throw “fat poured down from the rope of a hanged man” into the fire. These beliefs were due to the fact that, during hanging, the body of the condemned man often reacted with an erection caused by the mechanical stretching of the lumbar marrow that strained the centres responsible for the functioning of the urogenital apparatus”.

From the Age of the Enlightenment onwards …
The 18th century, the stage of two great libertines of history such as Casanova and the Marquis de Sade, triumphantly celebrated the intimate relationship between the pleasures of the mouth and those of the alcove with spicy red meats, game, peacock and “miraculous” tomatoes, Peruvian potatoes and chocolate.
In the 19th century, while the aphrodisiac power of asparagus spread throughout Europe, to the point of being forbidden to nuns and monks, from West Africa came a new “stimulus” derived from the inner part of the bark of Yohimbe, called, for obvious reasons, the “Tree of Love”.
With the advent of chemistry, the powders derived from insects followed, irritating and sometimes lethal, and since the Second World War drugs replaced the ancient magic remedies.

And today? A very different story…