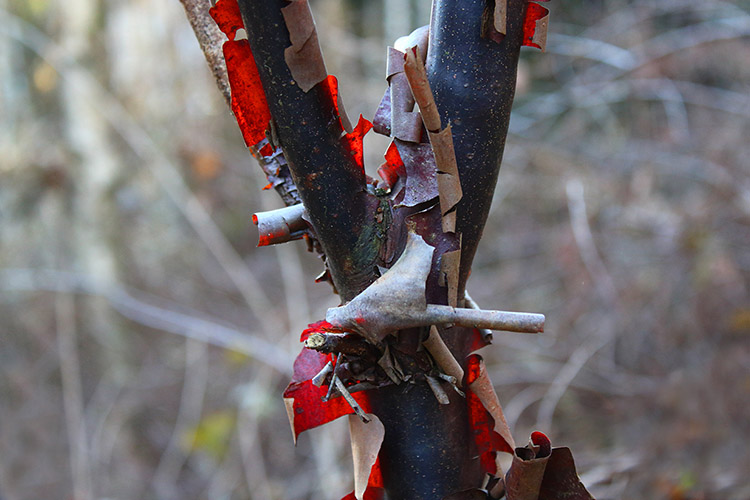 Like skilled transformers, but always leading actors, maples display very different shapes but always know how to draw our attention with their bearing, the autumn colours of their branches, their bark, shape and colours of the leaves.
They grow along the temperate climate zone in North America, Asia and Europe, but wherever they are, they make sure to create scenarios like these …

Between lake and sky

After the first colds, in November, a return of warmth may occur. It is the “Indian summer”.
On Lake Ontario, in Québec, it is a great event and from the shore you can admire the theatrical show. Water and sky embrace each other, getting lost in each other, creating a surreal scenery. Forests lapping the lake come to life: thousands of maples (Acer rubrum) are tinged with vibrant warm colours from gold to ochre, from yellow to orange. The tops of the fir trees (Abies balsamea) stand out sporadically, while down below the water is caressed by the last grasses, sometimes still tenuously green, sometimes straw yellow.
Just above, flanked by the austere fir trees in their bright green garment, the maples that collected the reverberation from the lake in summer, now proudly show their scarlet colour.

Among the roofs of the temple

The centuries-old Japanese tradition of hunting for autumn leaves repeats itself: the Momijigari. In a temple outside Kyoto, a small stream runs through a garden.

While down below the light gravel attracts the eye in its precise furrows, higher up the rays of the grazing sun create a surreal background. The safe and imperturbable forms of rigorously pruned shrubs and boulders line the gravel, immersed in soft green waves of moss disappearing into the water.

Opposite, touching the water in a disconcerting contrast, clouds of Acer palmatum leaves, as if floating in the air, seem to freeze time and dress in amaranth, gold, pink and orange. On the water there are the lying leaves, revived by the elegant red and white movements of the koi carps, and time goes by again.

Spectators of a dance

When the great cold begins to let go and the lights return to make colours shine, in Siberia, along the bends of the Amur river, a great show is staged. The clear sky dominates the snow-covered land, turning it on with light, occasionally a few tufts of more tenacious grass give a brushstroke of gold. Behind, the bronze skin of Acer griseum shines in the sun, and as dressed up for a party, these trees let their debarked spots light up in caramel tones. They are ready to witness the dance of the Manchurian crane, an almost mythological animal that every year returns to renew or seal its promise of loyalty.

In each valley a small stream has come to life, the rainy season will soon leave room for pleasant spring days. At Acquapendente, a crossroads between Tuscany, Umbria and Lazio, in the Sasseto wood a cheerful stream flows. While below the water twists and turns, aside in the background the big secular trees with their worn trunks watch seriously, almost severely.
Large boulders flank the river, over which over the centuries mosses and small ferns have created a soft bright green cover. Where they are uncovered, the porous boulders of tuff and piperno show us their volcanic origin, flooding the air with a memory of primitive energy. From the rocks movements with the colour of the cooled lava come out: Savi’s salamanders, recently awakened from the winter lethargy venture among the mosses, showing, in their phlegmatic movements, their magmatic red abdomen.
Above, a great Italic maple (Acer opalus), whose strong trunk is now silvered by lichens that over the years have chosen to adorn it, comes to life. Like a yellow and acid green firework, delicate inflorescences shine on each tips of its branches: it is spring.

The spring rains generously spray the vegetation of the north east coast of the United States of America. Along a ridge of the Acadia National Park, on a large outcropping stone slab, the green velvet of the mosses and the soft glaucous clouds of the lichens shine bright, while above the tripled leaves of the Acer pensylvanicum seem to want to occupy every space in the vault of the woods.

When there is a flicker below, an intersection of lines:a passing lynx, with the horizontal lines of its coat, crosses the multiple lichen-coloured verticals drawn on the green skin of the maple trunks, impatient to grow.

These scenes reveal that the spectacular nature of a plant is enhanced and amplified, if it is within a context.
It is necessary to understand the natural environments in order to transpose them into the gardens that we create.
It doesn’t matter whether they are large or small, it is essential that they tell about beauty.

A tribute to Gertrude Jekyll, who in 1900 used this technique to describe her gardens.