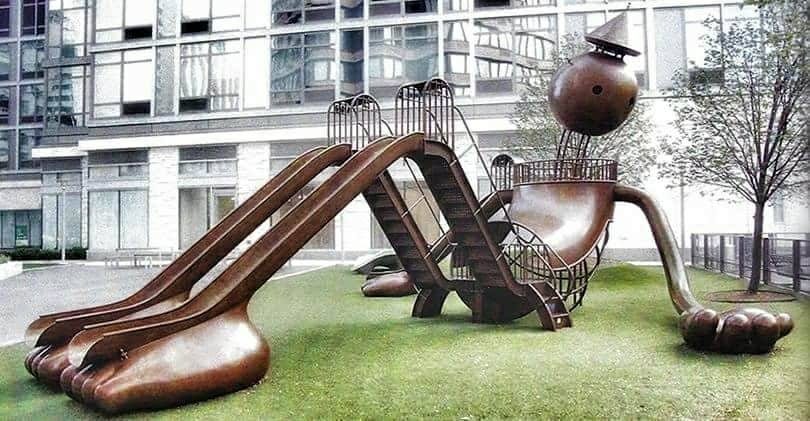 “There is a relationship between art and play. Art as well as play involves a creative action and generates emotions, expressing a social and communicative function. This is how artistic interventions can create playful opportunities. (…)These may be works of art born as such that spontaneously and casually get a playful function according to the interpretation of the public.”

In addition to the creative, participatory, landscaping and communicative aspect, works of art may have economic and social implications, thus generating a collective opportunity for considering the use of different resources. Examples of this are the installations where the reuse of everyday objects, infrastructures or abandoned public spaces, is envisaged.

In other instances, the work is conceived as a real playful installation in which the energy of the “player”, feeling part of the work itself, blends with the artist’s creative energy.

Here are just a few examples.
In the park of Château de Sceaux, south of Paris, by André Le Nôtre, a play path has been created that, in addition to particularly caring for the thematic aspect, contemplates the proposal of contemporary sculptures perfectly integrating into the seventeenth-century site.
In Italy, instead, with “Il Giardino Volante” of Villa Capecchi in Pistoia, an abandoned part of the garden has been regenerated by including play sculptures which help interact and develop imagination.
Very interesting and impressive are the gigantic works of the American sculptor Tom Otterness, which are placed in public play areas in New York and in the whole world.
At Kew Gardens, near London, a land art work, made with trees fallen during a hurricane, perfectly integrated into the context: an adventurous path among trunks combined with didactics. An undoubtedly successful project, which is however not always feasible, if we consider the context of the historical garden to which special attention should be paid. In fact, plays made with natural elements do not always appear to be compatible with areas having a formal plan or adjacent to architectures.

The options to let people “play with art”, different and scattered around the world, are all united in the desire of teaching how to play and appreciate art at the same time.
“Art, beauty and creativity should be part of the world of everyone and in particular of children and young people at all stages of their education”.