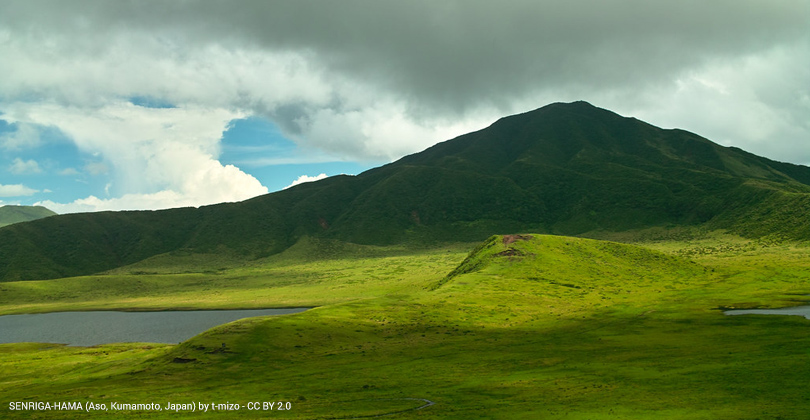 In Japan, in the prefecture of Kumamoto

The landscape of the prefecture of Kumamoto is sculpted by volcanoes, including the very active Mount Aso, which stands near the Kikuchi falls and the Yamaga springs.

The prefecture is dotted with famous spa resorts, including Kurokawa Onsen, surrounded by forests.
Here, where you can breathe the atmosphere of the past, with wooden buildings, earthen walls and stone stairs, during the summer you can stroll in yukata and geta sandals among the ryokans, traditional Japanese inns, shops and cafes, sipping a freshly squeezed dekopon, the sweet and juicy “tangerine sumo”.

Everything happens in the shadow of the Kumamoto castle and its imposing black facade.

In these parts, among the snow-capped mountains of the southern mountain passes, where wild tea plants grow, you can encounter a rare yōkai (妖怪), the Abura Sumashi.
The yōkai, spirits, monsters and demons of Japanese popular culture, are disturbing and magical creatures, monstrous or human in appearance, bearers of misfortune or benevolent.

The Abura Sumashi are not famous for their beauty. They look like short, stocky men, with a particularly ugly head, shaped like a stone or potato. They wear the typical straw dusters of Japanese pilgrims.
Their name means “oil squeezer” and is said to derive from the fact that, in the course of their earthly life they would have been thieves of the oil extracted from the seeds of the tea plants. Hidden in the forests, unobtainable and therefore escaped from punishment, they would then reincarnate (and still reincarnate) in these ugly humanoids.
It is not known for certain where they come from, nor what they eat, also because of the difficulty and the rarity to meet them.

We certainly know the most famous individual who lives on the Kusazumigoe pass, and we know that “If for example an old woman walking along the pass road says to her grandchildren: “You know, a long time ago in these parts lived an Abura Sumashi”, it may happen that a mysterious voice rises to answer: “And it still lives”»1

> The prefecture of Kumamoto is here