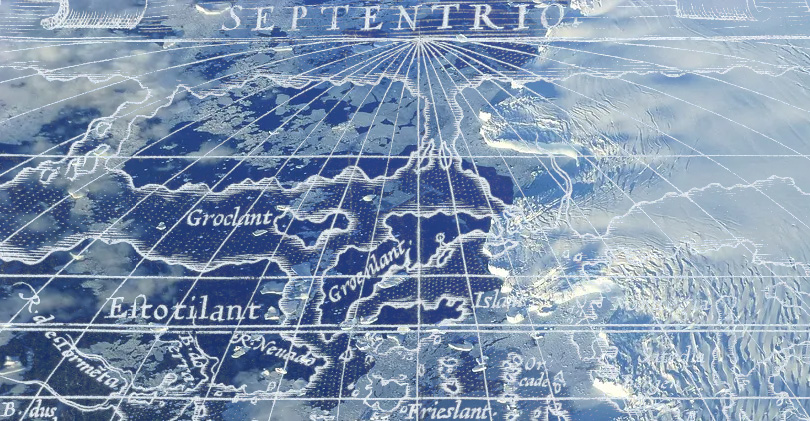 4th century BC.
While sailing towards the oceans of the North, the Greek geographer Pytheas discovers and baptizes an island that has never been explored.
He calls it Thule. Its landscape is incredible and indefinable, it is a place where the sun never sets behind the horizon. It is neither land nor ocean, “it seems to oscillate between liquid and solid worlds”.
But where exactly is Thule? From too approximate indications it is not possible to understand it precisely. Here is where a legendary landscape is born.

In ancient times, the northern seas were little known, indeed practically unknown.
After Pytheas, the fact of not being able to define the exact position of Thule plunges scholars into the sea of conjectures: they imagine it close to Scotland, Greenland, they identify it in Norway, Iceland, the Faroe islands, … A scientifically unsustainable situation, which leads some to discredit the geographer, calling him a visionary and a storyteller.
In his work “On the ocean”, quotations of which can be found in the studies of authors such as Prolybius and Strabo, Pytheas describes Tule as a “marine lung”, a definition evoking the consistency of a jellyfish due to the phenomenon observable in the sea water as it turns into ice and becomes fluid and viscous.
A clue that however does not unravel the uncertainties, which instead continue to shape the legend over the centuries.

This brings us to the 17th century, when the cartographer Joan Blaeu chooses to leave a void on the maps regarding the presumed position of the island, this determining the myth of Thule.
Its eternal presence is thus engraved in the imagination of navigators, cartographers, poets and remains indelible among the pages of ancient writings.