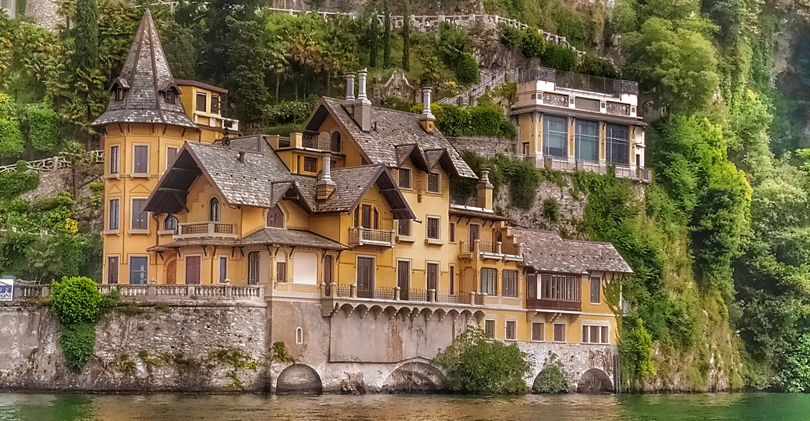 Between Villa Cagni Troubetzkoy – called by the inhabitants “turbascogli” (destroyer of rocks), because it was built with dynamite in the mountain — and the Mandarin Oriental, in the centre of which stands the beautiful 19th century Villa Roccabruna, which belonged to the opera singer Giuditta Pasta, little Blevio stands sleepy, a village with the “seven cities”, or the seven hamlets.
Behind the majestic Mylius-Cademartori, going up the mountain, you come across the devil of Blevio and the so- called Pietra Nairola, a complex of the mysterious erratic boulders typical of the Lake Como landscape.

“ … on the backs of the hills, on the sides of the mountains, on the edges of the lakes… everywhere… you will see either alone, or in fantastic groups, or monstrously aligned…. enormous pieces of granite, porphyry, of serpentines, of alpine rocks of all kinds evidently uprooted from the distant mountains brought further down, hundreds of miles away and placed to lie so rough and shapeless, where they can better amaze us… ”.

Mysterious because over time various reasons have been given for the presence of these large boulders, so different from the context, one of which even makes them go back to heaven. In fact they would be meteorites, hurled by the gods as a gift to men, from which to manufacture – as Egyptian pharaohs and Mayan, Aztec, Inca and Mesopotamian rulers already did – sacred ceremonial knives.
To date, it seems that they have reached such unique positions following the melting of the glaciers. “More generally, erratic boulders are clusters that have survived the erosion of incoherent layers of soil (not strictly linked to glacial cycling and, therefore, also of recent formation) or larger stones transported to the marshy mouths of rivers, on the shores of lakes or in peats”.1 Furthermore, they are also often the subject of prehistoric inscriptions of great value due to their uniqueness.

The Pietra Nairola, specifically, represents a complex of “large stones almost vertically driven into the ground, like monoliths”2, as often happens, at the centre of a legend in which the devil had a hand…

On one of these stones, perhaps the largest and most famous, you can find an imprint that someone says is a foot, but, following the legend, it would be none other than that of the hand of the devil.
A devil with carnival and playful aspects, however: in fact he seems to have enjoyed throwing the boulders, like balls, up to Monte San Maurizio. It would have been gravity to make them fall back, where the devil was waiting for nothing else to start again.

In the folklore of our areas, but not only, the devil was not as frightening as he later became over time together with a certain Christian-Catholic demonization: the devil was actually a demon of the air, between gods and men, protector of daily activities. Sort of a goblin and everyone had their own…
An example of this long tradition is “Farfarello”, one of the demons of the Malebranche of Dante’s Inferno: it seems that his name is the only one documented prior to Dante, which can be translated as scoundrel, probably from the Arabic fanfar, i.e. goblin, light-hearted, talkative, “hence fanfare, to agitate, to be inconstant, and perhaps, also farfalla (butterfly)”3