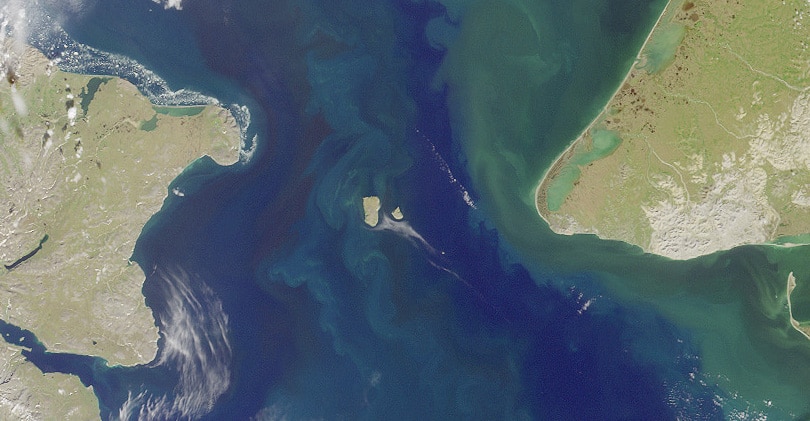 In the Bering Strait

At the northernmost point of the Pacific Ocean, the easternmost of Asia and the westernmost of the United States of America, there is a place where the US and Russia meet.
The Bering Strait, mythical and legendary, is battered by raging storms and shrouded in thick fog.
From its icy waters emerge the Diomedes, two rocky islands, inhabited by grasses and lichens, a few men, seals, polar bears, crabs, and dominated by the blinding white of ice and snow.
Imaqliq, the largest, belongs to Russia, while Inaliq, the smallest, has been American since 1867, when Tsar Alexander II sold Alaska to the United States.

In the narrow stretch of sea that separates them, runs the International Date Line, i.e. the imaginary line that since 1884 has marked the cadence of time zones all over the world. Crossing it means travelling through time: over a physical distance of 3.8 kilometres, the time difference is 21 hours.
In the water between the islands, there is also the maritime border of the two countries, a passage historically, meteorologically and politically dubbed “ice curtain”.

In ancient times, the two islands were located along Beringia, the isthmus that united Siberia and Alaska and which is said to have been a migratory route for the Amerindians, the ancient colonizers of the “New World”.

During the early 1900s the native population of Imaqliq was forced to leave their land. Before abandoning it, however, it is said that the inhabitants cast the terrible curse of a shaman on the island and on anyone who had landed there. An anathema to which, even today, all the misfortunes that affect those who live there are attributed.
A story that tells how the landscape, albeit extreme and difficult, is indissoluble from the very nature of man.

> The Diomede Islands are here