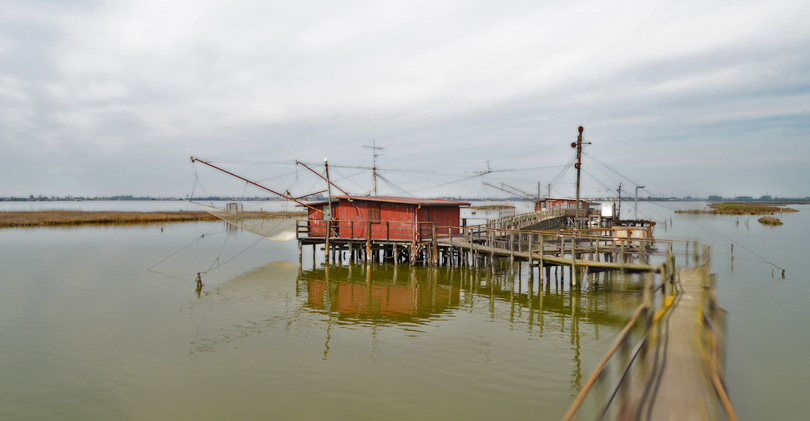 Between Emilia Romagna and Veneto

Sweet and salty waters mix and shape the earth. Flora and fauna coexist in thousands of species.
The Po Delta Park is a world apart. A place with exemplary biodiversity, to be travelled and retraced in a slow 5-senses mode, between benches, river and sea, woods and swamps, history and silence.

It is time for the rediscovery of the water landscapes, which attract with an ancestral call and are a source of a psychophysical well-being.
The fascination that water, in its flow and expanses, exerts on man is atavistic, biological, psychological.

The Po Delta is such a unique ecosystem that it inspired legends according to which the ancient inhabitants of the most marshy areas were amphibious creatures, half reptiles and half men, who then retreated into darker waters.

Here in the winters of a few decades ago, during the filò in the stables, the “crocodile men” were among the favourite characters of the stories.
It is said that these stories inspired great authors such as Howard Phillips Lovecraft, who in these places, legend within legend, embarked on a journey after the chance discovery of a diary.
Like the waters of these places, history and legend come together to make us bask in the fantastic belief that neither prevails over the other.