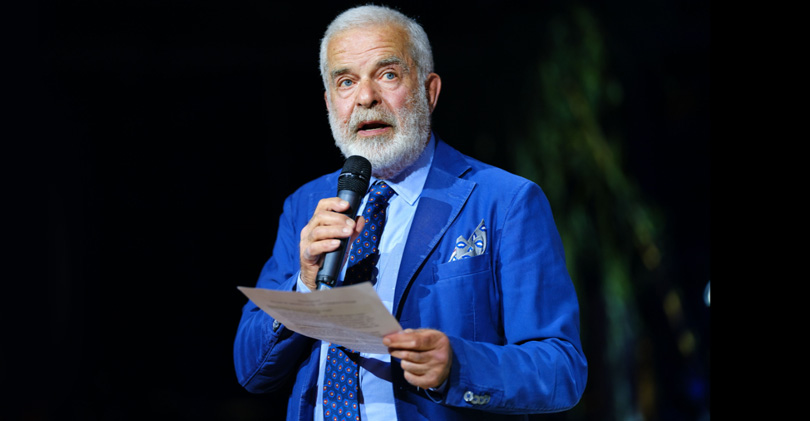 The cultural and artistic event dedicated to those for whom nature is a lifestyle has been once again a major success. On Sunday it was sold out, with crowded exhibitors and food outlets. Winner of the international competition “Creative Spaces” was the installation “Alla ricerca di sé stessi” (In search of oneself) by Arianna Tomatis

Is there no longer a place where the imagination can take refuge to dictate its own conditions and create new forms of beauty, new visions, new ruptures? (…) Yes, it is of vital importance that such a place exists. Ian McEwan

Cernobbio (CO), October 5, 2022 – Making landscape culture and taking the right time to cultivate the imagination. These are the keywords of the twelfth edition of Orticolario, the cultural and artistic event dedicated to those who experience nature as a lifestyle, held at Villa Erba on Lake Como from September 29 to October 2: to the great satisfaction of the organizers, despite the persistent rain in the first two days of the event, nearly 25.000 visitors have been reached; Sunday was sold out with very crowded exhibitors and refreshment points. An edition full of novelties, first and foremost the opening of the gates as early as Thursday afternoon and the ticket office only online, and featuring several appointments already fully booked even before the start of the event: from the charity dinner on Thursday evening to various thematic workshops.

Considerable, as always, the presence of children, with about 750 pupils from kindergartens, primary and lower secondary schools between Thursday and Friday, and excellent participation in educational-creative workshops on Saturday and Sunday.

The success of the event is not only demonstrated by the numbers, but also by the meticulous attention to detail in the installations and the original and “reasoned” proposals of the exhibitors.

“We are really pleased we were able to organize a physical edition after a two- year stop – comments Moritz Mantero, President of Orticolario. The numbers we reached make us realize how much people believe in beauty and need to be in contact with nature. But what satisfies us is also the message that we were able to convey through the quality of the exhibitors, many of whom offer products that contribute to a lower impact on the environment. In fact, it is increasingly important to make informed choices, such as purchasing plants with low water consumption, and natural fertilizers and treatments. Avant gardening also means sowing seeds for a better future. And the numerous children, who participate in our workshops, show that they grasp this thought in the best possible way”.

Among the highlights, the awarding of the “Avant Gardening Award” 2022 to Chantal Colleu-Dumond, director of the Domaine de Chaumont-sur-Loire, in the Loire Valley, France, and of the Festival International des Jardins, an internationally renowned event that welcomes landscape architects and garden designers from all continents. The award is made by Nicola Salvatore, an artist born in Salerno, who has been in Como for a long time. Chantal Colleu- Dumond, visibly moved, expressed her satisfaction with the prize received and defined Orticolario “a truly interesting event”.

To be noted the awards ceremony for the installations created in the park, selected by the jury of the international competition “Creative Spaces”. The “La Foglia d’Oro del Lago di Como” award (conceived and created by Gino Seguso of the historic Vetreria Artistica Archimede Seguso di Murano) was given to the space entitled “Alla ricerca di sé stessi”, designed and created by Arianna Tomatis, awarded for consistency with the theme of the year, the fairy tale, and the use of bamboo, plant of the edition. Among the “Creative Spaces” there are also: “Capitolo 7”, project and realization by Mario Mariani and Matteo Boccardo, who won the “Art” e “Villa Carlotta” awards; “La meraviglia del non sapere” by Ilaria Menici for Mema Giardini, who received the “Villa d’Este”, “Aiapp – Matilde Marazzi”, “Great Italian Gardens” and “Journalists” awards.

Here are the prizes awarded by the Aesthetic Committee: “Best set-up” to Il Giardino; “Best product set-up” to Anna Flower Designer; “Best plants set-up” to Aromatiche Clagia. The prizes awarded by the Technical Committee are: “Rarity” to Rifnik Garden & Plants for Cunninghamia lanceolata; “Super Specimen” to A&G Floroortoagricola for Agave geminiflora; “Collection” to Azienda Agricola D’Aleo for the large collection of the genus Passiflora, species and hybrids of their own production. The President Award was awarded to “Infantia Mors Fabula” by Mirko Quaglietta and Il papavero blu, for interpreting the essence and formative value of the fairy tale, arousing emotions and adding magic to the park’s atmosphere through materials recovered from nature, while the special mention of the President was attributed to “EspEmo” by Tiziano Pedrazzoli of TiEvent, for enhancing the existing vegetable gallery in the park, transforming it into a dreamlike and fairy-tale entrance with the artistic / exhibition collaboration of Sara El Kachtaoui. Finally, the “Gardenia Award” for the “memorable” nursery, exhibitor or installation of the Orticolario edition, was awarded to Benatti & Co, for their ability to network and inspire, suggesting how to use and combine plants and furnishings in sale.

May we remember that the purpose of Orticolario is to promote the culture of the landscape and to raise funds for local associations involved in social issues and which contributed to the realization of the event.

The organizers have already started the countdown for the next edition, the thirteenth, scheduled from Thursday September 28 to Sunday, October 1, 2023. A new fairy tale to imagine, a new plot to create.

Orticolario, now in its twelfth edition, is the cultural event dedicated to those for whom nature is a lifestyle. Scene of the exhibition will be the botanical park of Villa Erba in Cernobbio (CO), a nineteenth-century manor house overlooking the shores of Lake Como, childhood summer residence of director Luchino Visconti. A distinctive feature is the proposal of thematic gardens and art installations inspired by the theme of the year, among which the creations of the artists selected in the international competition “Creative Spaces” stand out. The exhibition is enriched by a wide range of rare, unusual and collectible plants, artistic craftsmanship and design with about 270 carefully selected exhibitors, an intensive calendar of meetings and numerous educational and creative workshops for children, as well as performances and experiences. At the centre of the exhibition there is art, which is able to go beyond and break down the borders between inside and outside. During the four-day event and for the rest of the year, contributions are collected for the Amici di Orticolario Fund, which supports projects for the promotion of landscape culture and for five local charities. The next edition will take place from Thursday, September 29 to Sunday, October 1, 2023.