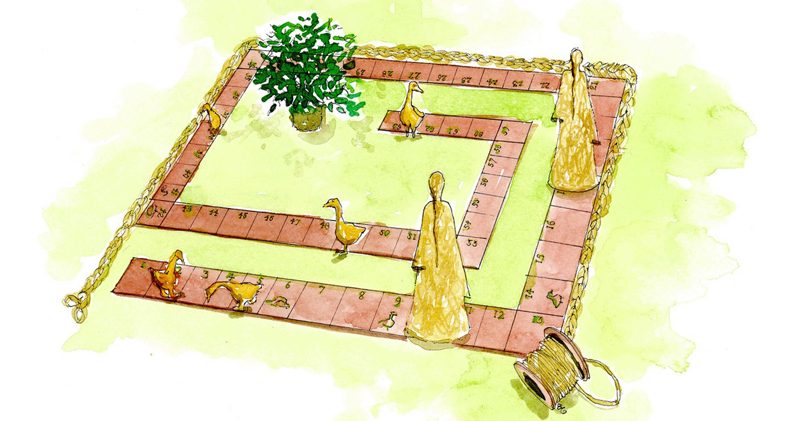 In the Park, a Ginkgo biloba in front of the lake

“Game of the goose”

The game of the goose is one of the oldest and most popular board games and is dedicated to a sacred animal connected to destiny, a bearer of wisdom and a messenger between deities and human beings.
For several years, however, it has fallen into oblivion and has been replaced by new games. That is why artist Julia Artico proposes it to Orticolario in a large interactive installation, highlighting its ancient symbologies.

It is a game of pure chance in which the player’s fate depends exclusively on the dice.
It is the metaphor of life: a path studded with traps, obstacles, gratifications and tests to be passed in order to arrive at the final square that symbolizes the whole existence and the reunification with the ONE, our origin.
In this game, where nothing is left to chance, the spiral moves anticlockwise, with the same motion of eagles soaring in the sky.
The squares represent the obstacles and the prizes scattered along the way, following each other according to well-established numerical rhythms.

It is possible to play in the installation

Just play, play and play! Have fun and good luck!

The space will house events.
> “Il Gioco nel Giardino” (only in Italian)