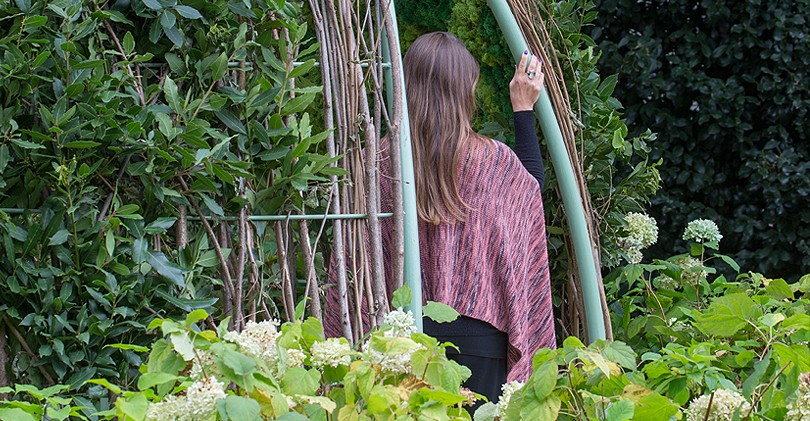 Here it is the preview of Gardens and Installations designed by finalists of the 2016 International Contest “Creative Spaces”.
Projects are going to be shown in Villa Erba Garden,  during Orticolario eighth edition.

> Map of Gardens and Installations in competition (.pdf)

We can get lost by mistake or by choice.
Losing the way inside nature, tasting the thrill of discovery, it can be sometimes a new and fully experience.
It is a snug garden which we arrive to our inner self, through a labyrinth of misty visions: fields of anemones where to take a break and let ourselves get carried away on the wind, ánemos (άνεμος), metaphor of a transitory existence.

The Zen garden is accessed through an arch of intertwined twigs.
A wooden walkway is surrounded by a grove of Acer Palmatum and Ophiopogon japonicus ‘Gyoku Ryu’, and leads to a place of meditation, a pentagon made of Tatami, where each vertex represents one of the five senses. Along the way, there are Japanese lanterns and ‘Sanzo Seki’, the garden’s main stone. A brazier and a fountain represent water and fire, elements of purification of body and mind, to embrace nature and awaken the sixth sense through meditation.

3. Spazio AM Casali
“Inside Nature”

Contemporary times recall us to a more intimate relationship with nature.
The Installation embraces us with a tridimensional landscape, a full-immersive experience. Surrounded by an organic form we can rediscover how to observe. The installation is structured as overlapping “horizons” of plants: an homage to Lake Como natural landscape. In the foreground the field, in the background graminaceous plants (Pennisetum and Stipa) and flowers (Achillea, Persicaria amplexicaulis, Allium ramosum and Anemone hupehensis), at the back bushes and trees.

A path into our inner world, made of sequences of rooms, where reside secret gardens of our soul. While descending into our inner selves, these rooms become more and more intimate and primal, awakening our Sixth Sense that will guide us to a deeper perception of the world, nature and humanity. In this way, the sequence starts with a rational garden of Buxus sempervirens, continuing with a domestic garden of Rosmarinum officinalis and Olea europea and, then, a natural garden of Poaceae.

In a field beyond a waterfall, Anemones blossom and grow resembling butterflies made of petals, kissing the still surface of water, within a water-scented kingdom of ferns and mosses. A place to transcend “reality” and find the Truth. A circle inscribed in a square reminds us that “the sky” is inside ourselves, Sixth Sense resides in everyone, sometimes blinded but always ready to awake.
As Italo Calvino said: “fantasy is a place where it rains” (Trad. Stefano Diana).

Where do intuitions and premonitions come from, we still don’t know. Some aspects of reality are visible, others are hidden but somewhat can be perceived. Through the orange ribbon can be seen alternatively backlit plants, leaves, logs and even other visitors silhouettes. There come in succession “garden episodes” dressed in purple, colour of intuition and perception, and they play with Anemones and Asters shadows.

Hidden behind a wide wall, a barrier between ourselves and our ego, nature shows itself in its most seductive shape: exotic and lush foliage, soft branches, unusual colours. The murmuring of water, emerging from this shady vegetation, is the natural refuge of the purity of the Anemones. Away from the daily chaos and immersed in nature, here we can live the sensorial experience which leads us to the most profound dimension of ourselves: the Sixth Sense.

Environmental damages have had a considerable effect on natural balance: events often leading to cellular alterations into the plants kingdom, resulting in a bizarre mutation of the original form.
“Mutations” wants us to listen to our own Sixth Sense, meditating on the effects human behaviour has on nature and himself: vines, cascading plants, imaginary and fantastic flowers made of fluorescent polycarbonate that change with light.