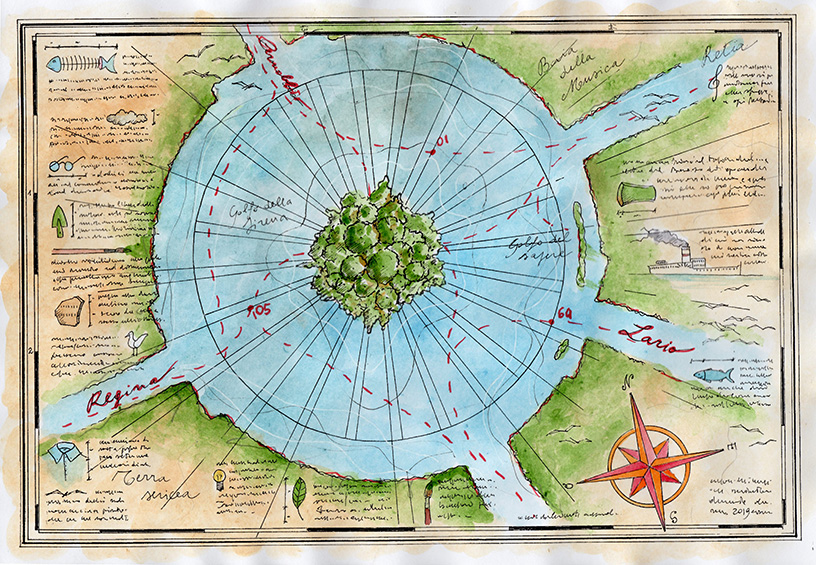 A small island that leaves its mark in the life of a man to the point of becoming “an archetypal island, the dream of the soul revealing a nature so radically unrelated to all geographical and human limitations.”*

The man is the landscaper Vittorio Peretto, who was inspired by a journey on the Isolino Virginia, a UNESCO World Heritage Site on Lake Varese, a small strip of land in the middle of the water, which contains a certain history of the world, permeated by suggestions and adventure.

It is from this inspiration that “L’Isola del tesoro” is born, the large installation that transforms the Central Pavilion into a real, wooded and wild island, surrounded by water and shrouded in fog, but at the same time unknown and impossible to find on the maps.
An expected and desired world, in which coves and small bays, the Baia del Sapere (the Knowledge Bay) and the Golfo della Sirena (Gulf of the mermaid) draw the contours and preserve myths and legends.

A journey from lake to lake, from island to island, out of the real space, where getting lost is the only way to find yourself.

Music and the sound of travel
The sound of lake waves, wind and breeze carries small imaginary canoes … Venturing into the waters, explorers encounter sirens of variable shapes, reassuring and captivating women whom they reluctantly leave to return to calmer waters and encounter villages of ancient and imaginary peoples.
In the water, the navigators, captured by the ecstasy of discovery, dream and hover towards the island in the middle of the lake, suspended above mists and waters. Here they let themselves be rocked among the thick foliage …