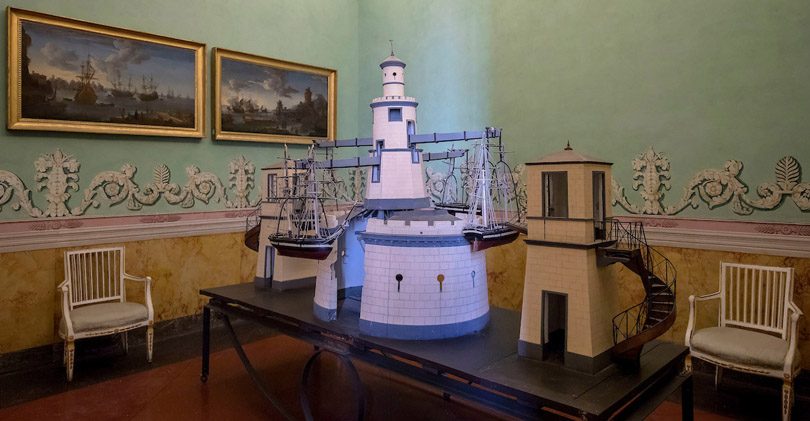 In the Villa Antica, Central hall

The “Flotta Aerea”, a precious wooden model for an amusement park open to the public, belongs to the Museum of the Royal Palace of Caserta and is exhibited exclusively at Orticolario.

It was made in the 19th century by the royal artisans and was reproduced in full size and placed together with other carousels in the Park of Villa Favorita di Resina at Ercolano, when the residence was enlarged by Leopold Bourbon.
A lithograph by Salvatore Fergola dated 1829 confirms that, after completion of the works, the Park was opened to the public during the summer months and on holidays.

The game consisted of a wheel with four rods, each carrying a boat-shaped basket, to which the visitor accessed from both sides through a tower guarded by uniformed guards. The wheel was activated by a mechanism hidden in a sort of casemate.
The Flotta Aerea was one of the most monumental structures of the park, ideal in a place that had been the seat of the Naval Academy of the Kingdom of Naples.
It really caught the collective imagination and an intrigued crowd gathered around each game, watching and waiting for their turn, controlled by a policeman who protected public policy and prevented  the “votta votta”, that is the Neapolitan pushing and shoving.

The work is part of a permanent exhibition including 10 models transferred to the Royal Palace of Caserta in 1879, when Villa Favorita was abandoned and the full-size carousels were gradually destroyed.