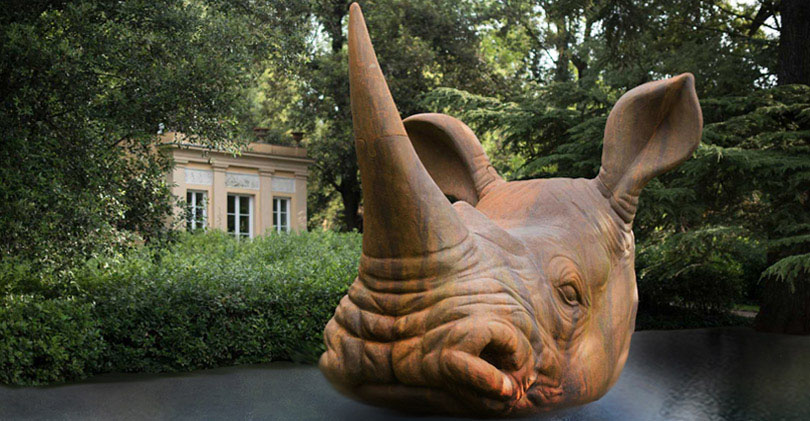 In the Park, the carp pond

Men.
In order to achieve their goals, they use the most disparate and unjustified means, often causing irreparable damages to the other living beings that populate the Earth.

In the new geological era of the Anthropocene, where the human being deludes himself that he is superior to nature and is able to dominate it, Galleria Galp encourage reflection with an imposing work by the artist Stefano Bombardieri.
“Testa” is a cry of rebellion against the senseless massacre of rhinos, caused by the poaching that leads to their extinction.
Strong and powerful creatures, but so fragile in the face of cruelty.

The powder obtained from their horn is in fact an ingredient used in traditional Asian medicine and to which healing and aphrodisiac properties are attributed. A popular legend, a belief that has its roots in the mists of time leading to an illegal trade and an absurd barbarity.

The work wishes to leave a mark, visually and deeply affecting all those who observe it.
For a greater awareness, for a new balance with nature, contributing to restore the threads that man has severed.

*exhibitor
(details on space number and location on Catalogue 2020)

> All the artists of Orticolario 2020