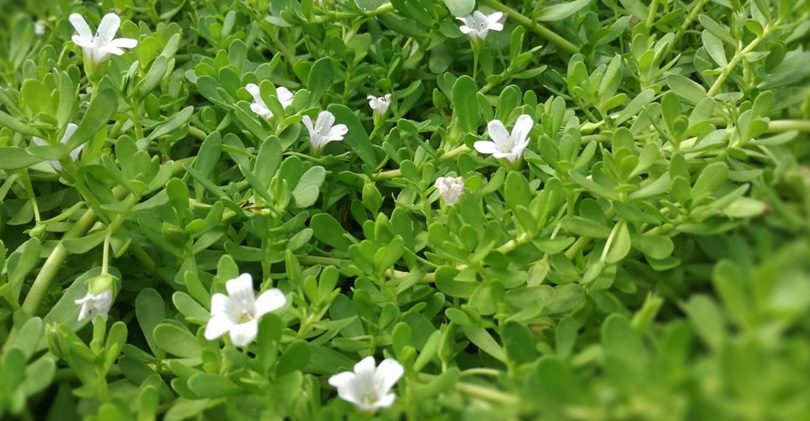 Bacopa monnieri is a perennial plant belonging to the family of Plantaginaceae, native to the swampy areas of India, Nepal, Sri Lanka, China, Pakistan, Taiwan and Vietnam. This creeping plant, with succulent leaves and white flowering, is also called Waterhyssop or Brahmi, and is used in the traditional Ayurvedic medicine for the treatment of epileptic and asthmatic disorders.

Withania somnifera, also known as Ashwagandha, belongs to the Solanaceae family. It has been known and used since ancient times in the Indian medicine, particularly the Ayurvedic one, as a tonic and adaptogen. The drug is generally in the roots, even if there are active ingredients in leaves and berries.

Among the Geel sages

Salvia pratensis
The lawn sage is a herbaceous perennial belonging to the Lamiaceae family. It often grows spontaneously in dry and sunny places, by roadsides, in slopes and grassy areas up to 1,600 meters above sea level. The bees collect nectar from its flowers, the leaves are aromatic and the flowers are purple colored: they are both edible and may be used in the kitchen.

Salvia repens
Native to South Africa, this plant is easy to grow and sufficiently rustic to be grown outdoors even at our latitude; to obtain excellent aesthetic results, you only need to provide a light and well drained soil.
It develops in spring and produces semi-woody branches with opposite rough and very aromatic leaves of a grassy green color.
The lilac-blue flowers appear as summer approaches and stay long on the plant.
Furthermore, on this sage no parasite problems have ever been found (insects and fungi). It can be cultivated in pot, care being taken to shake the old earth off the roots and add the new one at least every two years.

Salvia canariensis (Salvia canaria)
As the name suggests, it is a species native to the Canary Islands, where it is endemic and known by different names.
Of considerable size, the plant can reach heights of two meters. The silvery-white leaves are large, triangular, covered with down and particularly soft to the touch.
The whole plant has the typical aroma of sage with exotic notes.
The aesthetic results will be good, if the plant is grown in groups of more specimens. The blooms are definitely interesting. The apical inflorescences, thick and with pink-purple flowers, appear during the spring and in the autumn period.
Also this species has proved to tolerate sub-zero temperatures for short periods, provided it is grown in a dry and ventilated climate and in a well drained soil. The plant grows erect, firm and almost imposing. Also in this case there are no problems with pests.

Geel Floricultura exhibition space is in the Park.
Number and location: see the map given at the entrance.